I still find it jarring when I click “leave meeting” at the end of The Tempest and remember that I’m sitting in my living room surrounded by all sorts of junk and alone. It’s probably healthy for me though to get used to this. It’s like I’ve had a teleportation device installed that pulls me back to this living room after the show when normally I’d be blowing most of my wages on another round in whatever we have decided is the local pub we like the best. I teleported back to my living room about an hour ago after the second show of a two show day. I finished my mug of white wine and realised I wanted a beer and had none. Saturday night. Post show.

I got kitted up and walked to Tesco.

My Tesco metro is always very “live”. It’s catering to the residents of a large sheltered housing, a couple of old folks homes, the Chelsea pensioners, some of the Rothschilds, whoever lives in Oscar Wilde’s old house, a peabody estate, me, and all the people who have boats privately moored at Cadogan Pier. The thing that most people round here tend to share is a loud voice and the habit of taking up space. Saturday night, and people in the queue. The guy two in front of me wants to pay half cash half card but none of his cards work. He is polite and in no hurry. He occasionally apologises to those of us behind him. But the guys outside the shop are getting restless. One of them comes in and tells the security guard he has only got four inside and he can have six. Someone else tries to just walk in with his hood up. The security guard is new, and in the most heavy duty gear I’ve seen. There are only two staff on duty on the shop floor and both of them are new.

Eventually payment guy pays and the old guy in front of me starts hitting on the checkout girl. She’s Italian, he has some Italian, oh God, and now he wants her name. He’s not reading the room very well but again just no hurry. She’s probably doing something difficult in the normal world but this guy with his cracked voice is either being interested or being too interested. She answers him in monosyllables until he pays, never encouraging, never discouraging. That fine line that you see too many young women in service industries having to tread, knowing how quickly people like him might go sour.

I get to the front eventually. I try to leave so quickly I get called back as I haven’t paid yet. Oops. Thankfully nobody punches me.

I witnessed a fist fight years ago that spilt onto the pavement outside this Tesco. It was between an old guy who wanted alcohol and a manager who had put an arbitrary 10.50pm curfew on alcohol purchases, and some other guy who got stuck in, was immediately roundly insulted and went a bit bananas. It was a full moon, a summer’s day. Me and another guy actually had to break it up. It’s a weird shop at the best of times, and it basically just sells mayonnaise crisps and beef. Today there’s a whole shelf dedicated to UHT milk. I think they use a random number generator to stock the place, the freezers are always broken, and until recently there was a manager who stopped beer from being sold cold from the fridge as groups of people would sit all day on the bench opposite and slowly get hammered and he didn’t like it.

Still, it’s open at ten on a Saturday at Easter and the staff are working hard in difficult circumstances. I didn’t like the guy in the queue getting mardy with the guard. I shouldn’t really have been at the shop just for beer. I know it. So surely doubly important not to be a creep or an asshole.

But people are starting to get restless… Let’s ramp up our kindness this weekend if we brave the outside world. These shop staff – many of the people behind checkout are resourceful local people who have found a way to support themselves and their families through this crisis, but they still have to come to work and be polite while working an unfamiliar till. Fuck knows what they might do in the normal world. “I’m just in for the day, normally I’m in head office,” said the checkout in Waitrose King’s Road last week and thereby hangs a tale I’m sure.

I’m gonna have my beer now. 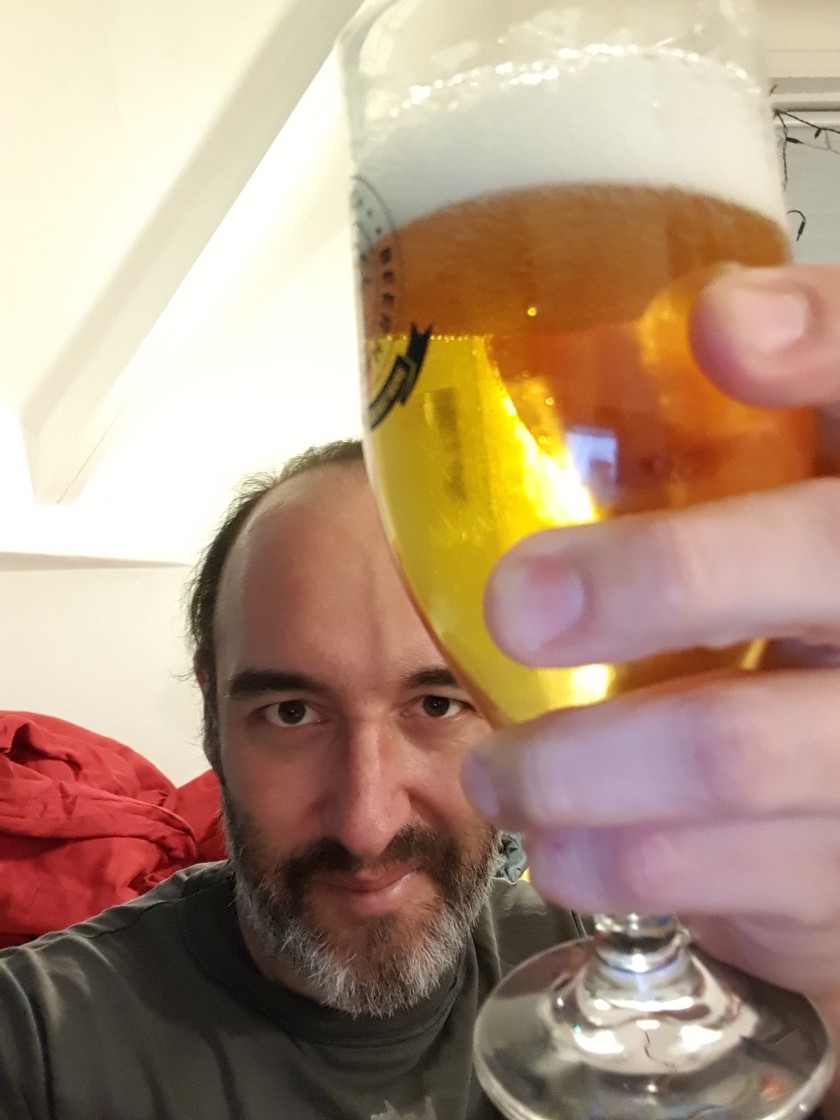