Hex has missed me. I’m up with him in Hampstead. Lou is on the sofa with me and parked in the street below is a car that I really don’t want anyone to break into tonight. It’s completely full of stuff. Clocks and busts and porcelain horses and jugs and pictures and luggage and plates. Lots of stuff to do with William Gladstone. Much of it very patriotic. Much of it very beautiful. All of it covered in a thin layer of soot. I found it black. I’ve brought it back to some sort of life. I’m moving it on.

Hampstead is the perfect launch pad to drive to The North, but Hex is very aware we haven’t had any skin time for weeks. I’ve been rushing in to change his water, huck him out or feed him. I haven’t stayed and chilled with him for a while. An extended contact made him excitable and affectionate. Perhaps a little too much so. “Are you ok,” Lou asked as I went silent and my face went red. “Yes,” I squeaked, but his affection and warmthseeking warranted a gentle finger under his strongest part after he had a good accidental go at suffocating me. Royal pythons are the perfect size, as we will always be stronger than they are. It was a very affectionate cuddle. Very very affectionate. I just had to prise him apart and reposition him where the centre of his friendly grip wasn’t my Adam’s apple.

Once he let me breathe again, he wandered around on me for ages snuffling my ear and knocking my glasses off. Now he’s back in his tank just as I’m too tired to stop him hiding in the smallest place be can find – usually a door hinge, under a wheel, in the mechanism of a sofa bed. It doesn’t matter so long as it’ll kill him by mistake. He can’t be let out of sight for his own safety. 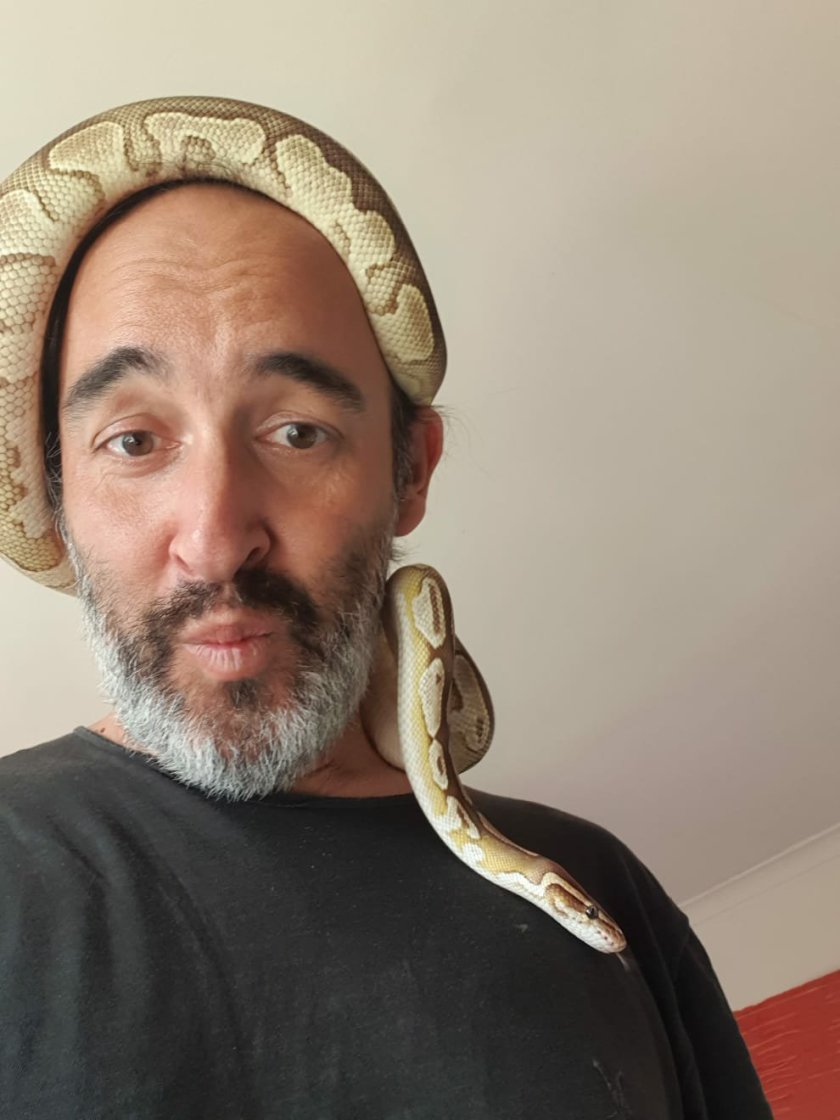 I’ll have him out when I’m alert again in the morning for more necky cuddles. Then I’ll take the laden car up to The North for more frolicking in the Nidd Valley.

Things are starting to make sense. I’m still in a transitional place, but it feels like we all are. My agent rang the other day to say that one of my favourite people won’t be coming back to the office in this new version of the world. No turnover… Fuck this virus. I’m finding other ways but I’ve never felt more ready to channel some energy, interpret some humanity through text, share the telling of a living story with other practitioners on a stage for and with an audience that wants to be there.

In the interim I’ll fill the little Nissan with bits and bobs, I’ll drive and teach driving, I’ll read people’s tarot, I’ll sort redecoration, I’ll housesit dogsit catsit and plantsit. I’ll find ways to keep in flow and be ready for nice things when they come to visit.