Ken Branagh stood up and capped tonight with a beautifully judged speech. “Fear and Dreams cannot coexist” – “Kindness is King” – “It’s about your team.” I’m so proud to have been at The Olivier Awards tonight and to have sat there and jumped out of my skin for joy when the home team won for Rotterdam. 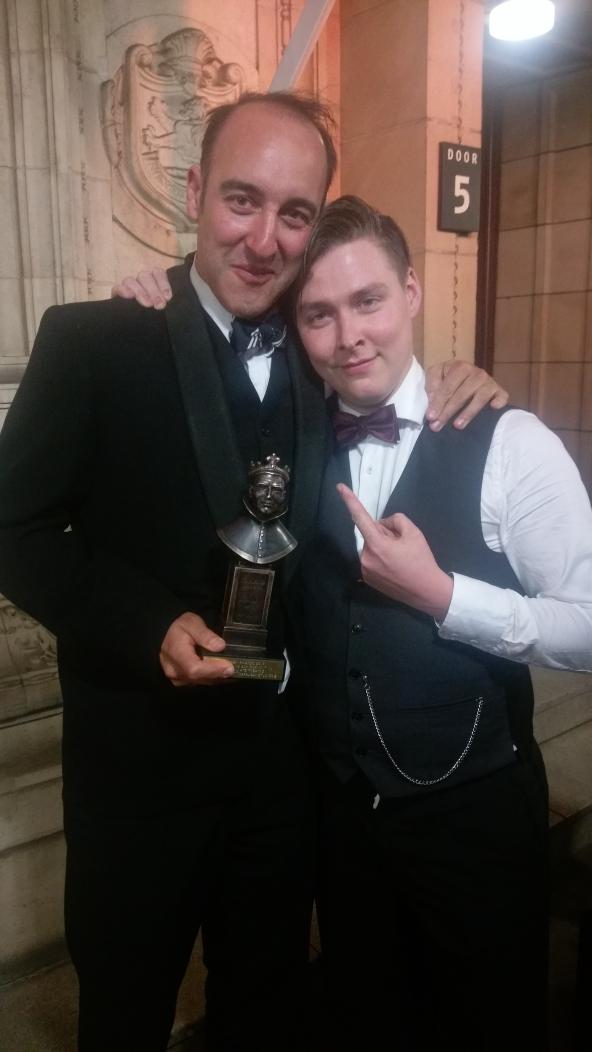 I love working in theatre. There’s not much money so most people that stay in the sector are in it for the art and for the love. The ceremony tonight was a celebration of that geeky togetherness which has kept me with my nose to the grindstone for years wondering when I am going to get an audition for a theatre that you’ve heard of. I’ve been working with a huge variety of great hearted and skillful people making glorious strange human things that are written on the wind. I’ve picked up some wonderful friends along the way.

Reading between the lines, dear regular reader, you might have noticed I’ve not had the easiest week. It’s been a rollercoaster with beautiful highs and crashing lows. For a moment I thought I might have found a rope ladder that I could use to climb out of the hole I’m in. But the top wasn’t tied to anything. It’s worse when you’ve hoped. I had a couple of instances where I felt like all the ephemeral work I’ve been doing over so many years, because it hasn’t been stamped with big shiny names, and because I’ve always done it for the joy of the work and never shouted it to the rooftops – somehow it felt like I’m still at square one. Like I have to struggle to persuade people who sit in offices and write emails to write some about me. But despite these concerns, I’m winning because my team is winning all around me. I saw a close friend in a feature film screening this morning at The Curzon Soho and he smashed it. Then I sat in The Albert Hall and watched a bunch of close mates, including one of my best friends, as they won a fucking Olivier award. Plus I have met a new person who has been making my life better this week just by existing. Plus I’m making a beautiful play, writing a screenplay, doing a reading on Tuesday, keeping really occupied. I even got sent a long wonderful script just a few days ago with a part that was both written for and based on me, where I was essentially characterised as the Batman of Theatre. As Tim Minchin said tonight – and Patsy Rodenberg throughout Guildhall – “It’s about the work.” I’ve been working on my craft diligently for years. If you build it, they will come. Proof positive, right there in the results of that prize ceremony. Those boys work hard and that award is a huge validation of that work. I’ve been beaming all the way home. The perfect high point end to a weird sad week. A reminder that each day is different – each moment in each day is different. We have to turn up, constantly turn up, and shrug off the bad in search of the good.

Well done to Brian and Louis for bringing Rotterdam from the 503 to the Trafalgar and now to New York. Anyone in New York, book it here – and it WILL sell out. It’s beautiful and timely. I have no stake in it beyond loving the people that produced it. But I’m so stoked. Also well done to Harry Potter, winning all but one of their 10 nominations. I love what that play has done for theatre. By all accounts it’s magical, and since it’s likely to be many people’s first experience of theatre, it might drive audiences for a generation to come.

My first theatre experience as a kid was filled with wonder. I expect I wouldn’t still be chasing this pipe dream if I hadn’t seen the actors packing up the van in a pool of light. I found it both beautiful and compelling to see their fellowship – these people who were no longer characters on stage, banging bits of truss with hammers and humping around flats. Now I know the reality of it I cling to that child’s romance. Perhaps I’ve met some of those guys since then. Perhaps I’ve even been in a pub with one of them. It’s a small world. I’ll keep on trying to stand in the right bit of it until I either find my light or the play ends I can go to the pub.

3 thoughts on “The Olivier Awards”