Knowing that Hampstead is supposed to represent a bit of a detox and a bit of a shit getting together period, I’ve been polishing off the wine I’ve got in Chelsea in anticipation of moving. The flat actually looks half decent now. I reckon I can leave it with Kitcat in charge for a few weeks.

Brian spun by at lunchtime on his incredible bike, making me glad of the company and envious of his wheels. I was still in sleeping gear. It was 2pm. He wasn’t under time pressure, having finished his checks for the day, so he waited while I got dressed. We had distance-sandwiches provided by Tesco. We sat on my bench watching the river at high tide. It was almost like being normal- but for the fact we couldn’t hug and the conversation was frequently going into “how the hell do we manage to keep making work?” territory.

There’s stuff out there. I saw a bold and strange Time Machine by Creation last night, continuing and adapting technique and thought from The Tempest into something challenging and topical, with real science. Fitzrovia Radio Hour are making something that’s likely to push the idea of what can be done live in a home green screen even further. I bet there’s a lot of stuff happening out there right now, being made, being dreamt, being born. I’m glad people are remaining generative. It’s always going to be the case. Give creative people time and toys and they’ll find an interesting way to play with them and try to include you if you walk past.

It’s peaceful here now, with the bath running and Kitcat browsing on her phone in the same room as me. It’s just gone midnight and I’ve been trying to eat all the perishables left in the fridge.

We saw the lunar eclipse through the window. The shadow of the earth over the full moon. Bright and dark. A beginning? A shift. A change of gear. 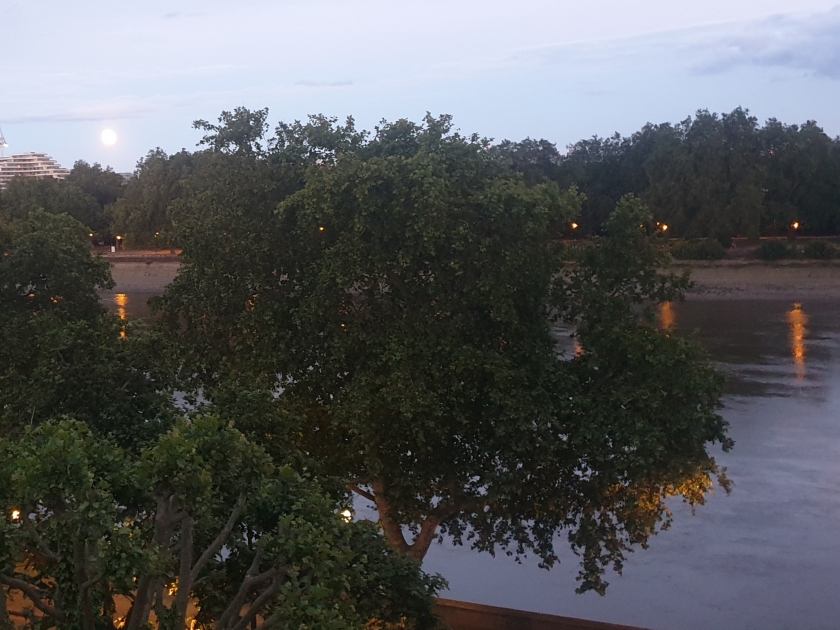 I’ve been packing as if I’m going on holiday, but really there’s little point as it’s just a short bus ride home and I bet I end up coming back all the time to … to swap out the Judge Dredd books I’ve read with the next lot … to pick up a box of random stuff to put on eBay … to grab my green screen and lights  … my swimming costume … whatever the heck it is that I decide it’s worth crossing town for.

Crossing town though – it does feel like a big old thing. I haven’t taken a bus or a tube since February. I won’t tomorrow either, I’ll get a cab and hang the expense.

Kitcat got a cab from Oxford to London and he charged her literally hundreds for the privilege. I kind of wish she’d asked me to drive her. If I’d charged her half what he charged, on a zipcar, I still would’ve made much more than I did for the Yorkshire job, which I pitched far too low by mistake. Still, he’ll have gone home full of it joys of Spring.

For tonight at least she has come into my very chilled out umbrella and we’re listening to Out of Season by Beth Gibbons and Rustin Man and just winding down. It’s not one of it 100 best albums of the nineties but I couldn’t cope with the Nine Inch Nails right now. And it sets the tone.