This was yesterday. The guy in front of me was a regular. Tense shift.

“Box of tiger prawns,” he utters in very uncertain English. I’m in a fishmonger cash and carry. They usually cater to restaurants but they’re open to the public. He pays £30 for his box. I tell him I’m going to get the same. He validates it. I’m up next. “Box of tiger prawns,” I ape. The shop guy hesitates for a second. They prefer it if punters get the prawns on display fir punters. But he gets me one. I want the polystyrene box so it can travel. “Eight scallops,” I continue, indicating the display. Huge great big queenies, roe attached. He gets them for me. He’s still with me even though I’m bluffing. But then “And four of these octopus.” “They’re cuttlefish.” Oops “I meant these octopus.” “They’re squid.” “Um… These ones?” “There’s only one left.” … “AND I SHALL PURCHASE IT.”

It didn’t matter that I was clueless. I still bought a huge amount of marvellous seafood. I brought it round to Tristan’s today. If anyone knows what to do with luxury ingredients it’s him. And it’s the cricket world cup final. I’ve watched a lot of cricket with Tristan over the years, and eaten good food into the bargain. Today the plan is to do both.

We are going to have a barbeque of sorts, but we got distracted. England won the Cricket World Cup but it was such a horribly close thing. Tanya was disinterested most of the day but suddenly, in the last few overs, she joined us watching as anybody would have. “And they say cricket is boring,” she says, knowing what is at stake and what is possible. Good God, what a final. What an incredibly tight game.

I remember watching the Superbowl with people who understood the game in LA, and starting to enjoy American football because of watching Tom Brady come back from too far behind by sheer force of will and unbelievable skill, which I only understood through the people I was with. This reminded me of that.

Watching Ben Stokes holding on by the skin of his teeth, so exhausted, so determined. Watching him take his helmet off when he thought he was caught and then readorn when it turned out to be a six as the fielder had stumbled into the boundary marker. Seeing him so apologetic when he got an accidental crucial 4 extra from a fielder throwing the ball into his bat and it rebounding to the boundary. All of this is jargon. But Stokes was indomitable. He wept off the pitch when it went to super overs. He actually was full on crying. He came back on, despite exhaustion, for that one last “penalty shootout” super over and he ran himself into the ground for the team and we won. 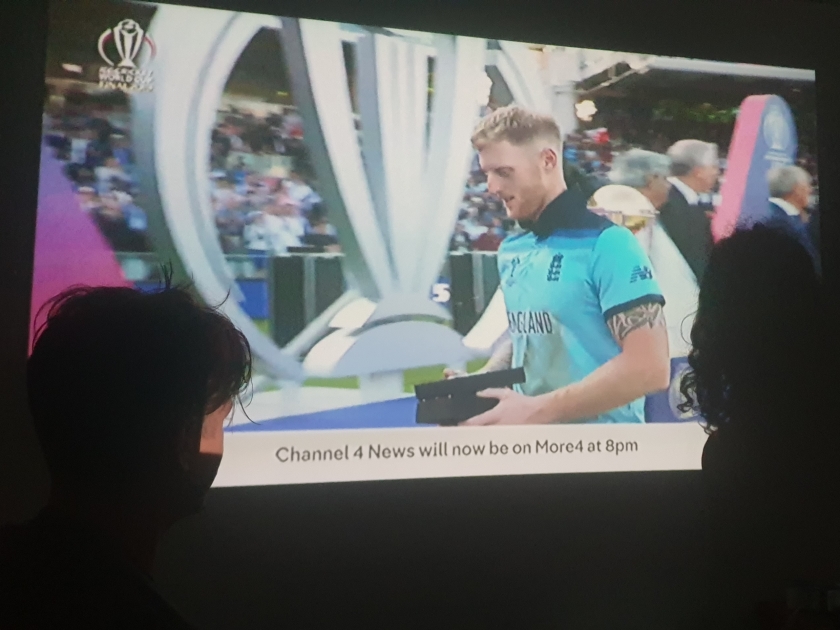 I watched a game of cricket today that anybody, if watching with people who could explain the details, would’ve appreciated deeply. I’m glad I made the effort to come to Richmond for it (with prawns.) Perhaps I wouldn’t have had this shared experience if I hadn’t bought the seafood. I felt terrible this morning but I had fifty quid of seafood in my fridge so no matter how tired I was on this, my only day off for a while, I wanted to go where the cricket was because there was also the incredible chef friend of mine who understands a box of tiger prawns. When it gets close, I love how there is no way to run down the timer like they do in timed games. You HAVE to bowl that ball. And they did. What a wonderful wonderful hard game to watch.

Lunch was scallops with concasse tomato, seeded rye wafers with a piquant drizzle of sage, roe and caper butter, served with wedges of lemon. Lunch was Tristan spending half an hour in the kitchen with a bunch of stuff. Both of the last two sentences are true. Supper will involve shrimps on the barbeque. Appropriate after watching us scrape that win against New Zealand after just … yes. Just the sort of match that makes us know why we love live sports. That’s why we create a game we can win or lose with The Factory. Because without the knife edge the stakes get lost…