Up early, throw clothes randomly into a case. Flesh my body in cloth from corners in my bedroom. Fuck fuck fuck I might be gone for a week do I have enough underwear? No. Matching socks? Who am I kidding? Are these even clean? They smell clean. Go time? Almost.

Ready to go. Early. No coffee! Fucking fucking shit I’ve run out of bastard coffee. Cup of tea then. Fuck. Oh and BIKING GEAR. Oh tits I’ll have to carry it all into rehearsal. Maybe not. It’s only six am. Get to the bus station. They’ll sell coffee there. Maybe I can get to Ginny’s early and drop bike stuff.

This bus is great. Oxford tube! Ha. Yeah, cos it’s like part of the tube network. Funny. Oxford and London. Connected. Nice young bus driver too. Seems a bit unsure. Learning his trade. There with his supervisor. Just as well really as I haven’t printed my ticket. Didn’t realise I was supposed to. Supervisor lets me on anyway. It’s only a single. Phew.

Tum te tum. Off to Oxford. What wonders await? Book to read. Day in the life of Ivan Denisovitch. Hour passes.

Oh. We are pulled up in a layby. All the doors are open. Driver gets out. “Where are we?” I think. He walks to the back. I get out, from curiosity.

His engine coolant light has gone on. We are 29 minutes from destination. But the light is on and there is a smell of oil. My brain shifts up a gear, from basic survival to immediate problem solving.

This guy is on one of his first trips. He’s not going to fuck this up by breaking the bus. The coolant light is on. There’s a smell. He opens the back. We both look pointlessly at the engine. A woman takes the opportunity to smoke. Everyone else sits in their seat. “What’s up?” “Engine coolant has run out. Better safe than sorry. There’s another bus twenty minutes behind us.” Oh God. He said “Better safe than sorry”

I know what that means. I don’t rhyme with it. I think of when I drove back from Sheffield at Christmas in a Jaguar where the engine was falling off and even though the windows were fully open so I didn’t die of fumes, if anyone had struck a spark I would’ve been immediately immolated in the core of a moving fireball. It was just me at risk though. So be it. If I’d gone up in flames it would’ve been personal and in the slow lane and probably just given someone a great story about their drive home for Christmas and that poor guy in the jag. I’d sooner not be sorry, but if it’s just me I’m ok with a bit of not so safe.

The driver goes to make the announcement telling us all to stay in our seats. I hear it distantly. I’ve already got my stuff and I’ve gone to the end of the shoulder to stick my thumb out. Fuck it, it’s worth a try. 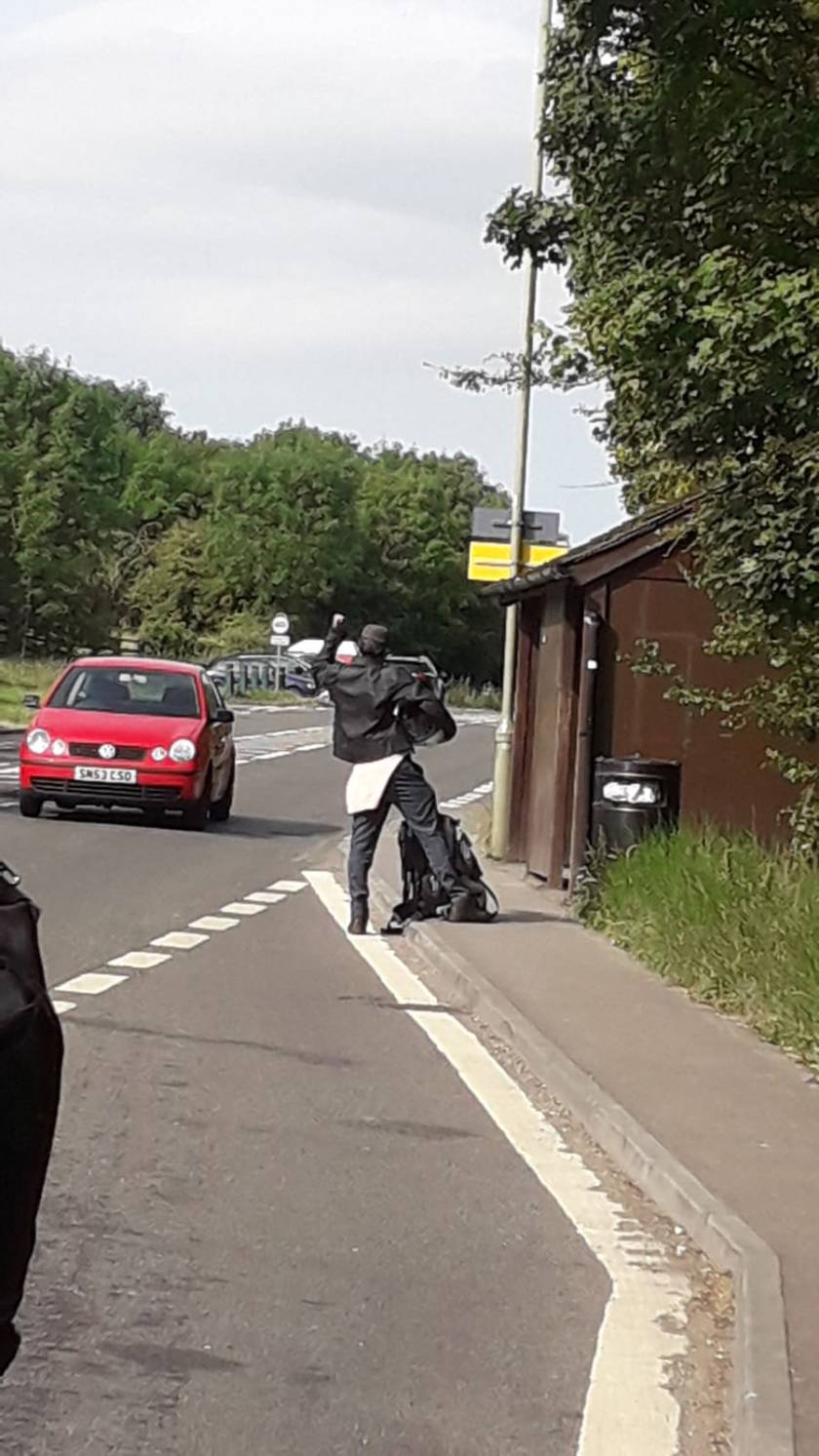 Last time I tried to hitchhike in Oxford it took two and a half hours. Eventually a policeman stopped on his day off. I could hear his teenage daughter screaming “no daddy please daddy don’t daddy.” When she discovered I’d been filming a short film she went quiet and sat forward, and her daddy said “You see?” She was just about to audition for drama school. I gave her some tips. I hope she got in.

This time it was no better. In half an hour I just saw a lot of frightened or mimbly pasty faced people try to look like they hadn’t seen me. After about fifteen minutes of contemplating the fear and indifference of middle England, someone from the bus walked up to me. “Are you Al Barclay?” “Yes?!” “I figured it’d have to be you, doing that. I’d looked at everybody else on the bus.”

I had messaged the WhatsApp for the theatre company – my first message. “Bus has broken down. Might be late.” He was on the same bus. He plays my son. Solidarity! “At least I’m not the only one late,” we are both now thinking. This unlikely circumstance on the first day of rehearsal becomes believable with two. And he took the photo, to try to get confirmation before he went and spoke to the weirdo.

Every other passenger is meek, either obediently sitting in the bus waiting to die or standing near it like it’s an anchor until it explodes. “Please remain in your seats.” That’s the party line. Fuck the party line.

It’s another of my dad’s lessons and it makes me an awkward bastard. “In any emergency situation, a voice will tell you what to do. Always look for a different option where you aren’t herded. The most danger and the least opportunity lies where everybody is told to go. If everybody dies in the same confined space it’s easier for them to account for you. Always splinter if you can and ignore them.” I’ve lived my life by that. I annoy my friends a lot.

I start to try to hitchhike for two. Nobody stops though of course. This is Oxfordshire. Pigfuck central. Strangers are bad.

Eventually the bus arrives, and some of the exploded passengers who have watched my ridiculous failed hitching attempts look at me with actual sneers because they haven’t exploded. I spend a moment wondering what it would be like to live as small as them, grin winningly, and go and have a brilliant day of rehearsal.

This’ll be fun, for sure, this Tempest. I can smell craic a mile off and this’ll certainly be craic. Bring it.