These tiny little dressing rooms… How many actors did we have tonight? About twelve. One of us a reasonably eminent comedian. All crammed into a tiny tiny room.

One rehearsal. One show. We were all there to support friends. And we all jammed into this mad tiny wardrobe to change. I just showed up at the theatre in costume because my costume is a variant on normal human clothes, but some of us didn’t have the luxury. Then there’s props and consumables. For me the biggest issue was fitting my wig. Mel had lent me a big long women’s wig that was roughly my colour. It’s a plot point so it needs to be vaguely believable. But with no budget you go with what you’re given, so I had to ponytail it and stick in an army of hairclips. None of these things are particularly familiar to me, although I did have a ponytail as a young man, knowing what male patterns lay in store for me. I incompetently stuck in a load of hairclips, got someone else’s makeup all over my ass, wiped it off, and then sat next to a 23 year old woman in school uniform while an old friend helped fix my hair styling incompetence and other people focused their gaze into empty corners and mumbled. Then we did a show. And of course we smashed it.

Sold out means very little when it’s one night only, but I’m glad there weren’t seats for us in the second half. I enjoyed it very much in the end, for the spirit and for the game of it. We played good theatre this evening. A reminder, as if we needed it, that there’s a huge amount of excellent talent out there wondering where the next job is coming from while three people play everybody.

I love The Arcola. The first time I worked there was on Victor’s Life some 15 years ago by this wonderful bonkers playwright Sibylle Berg. I puppeted and voiced a Tapir made by one of the guys that went on to make War Horse, alongside an equally eloquent deer puppet. The play was set in a future long after humanity was extinct and the ungulates ran the world. They had paid God and the Devil for a show about what humans were like.

A few months later I couldn’t make an initial R&D at BAC “exploring horses”. I was busy doing some sort of low paid / unpaid schmurtz. That workshop went on to be Joey and lots of actors of my type working ensemble in a game changing show that totally reassessed the viability of puppets in commercial theatre. Fuck it.

And so the opportunities sail by, but fuck I’ve learnt my craft while I’ve been missing those little ticks on the CV. And now I’m going for a long walk which will definitely help my craft again but won’t go on the old CV. But fuck the CV, he says with the conviction of someone who has said that too long while chasing some strange nebulous dragon of his own devising.

I’ll just keep playing weird people and watching them when I’m not playing them, and being one in the interim and feeling and stretching and crying and wishing and seeking. And looking like a tit in a ponytail… It was nice to have hair for a change. I’d like to have had more hair. 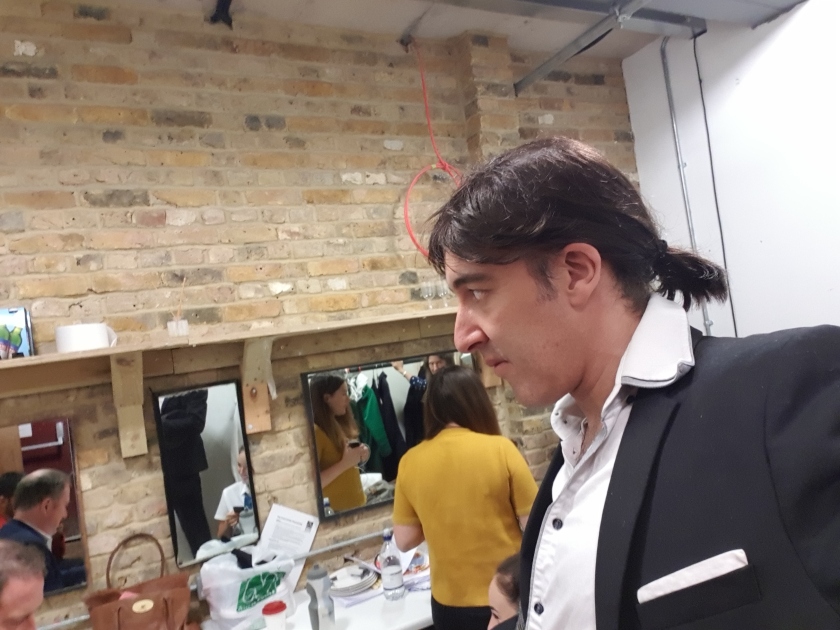