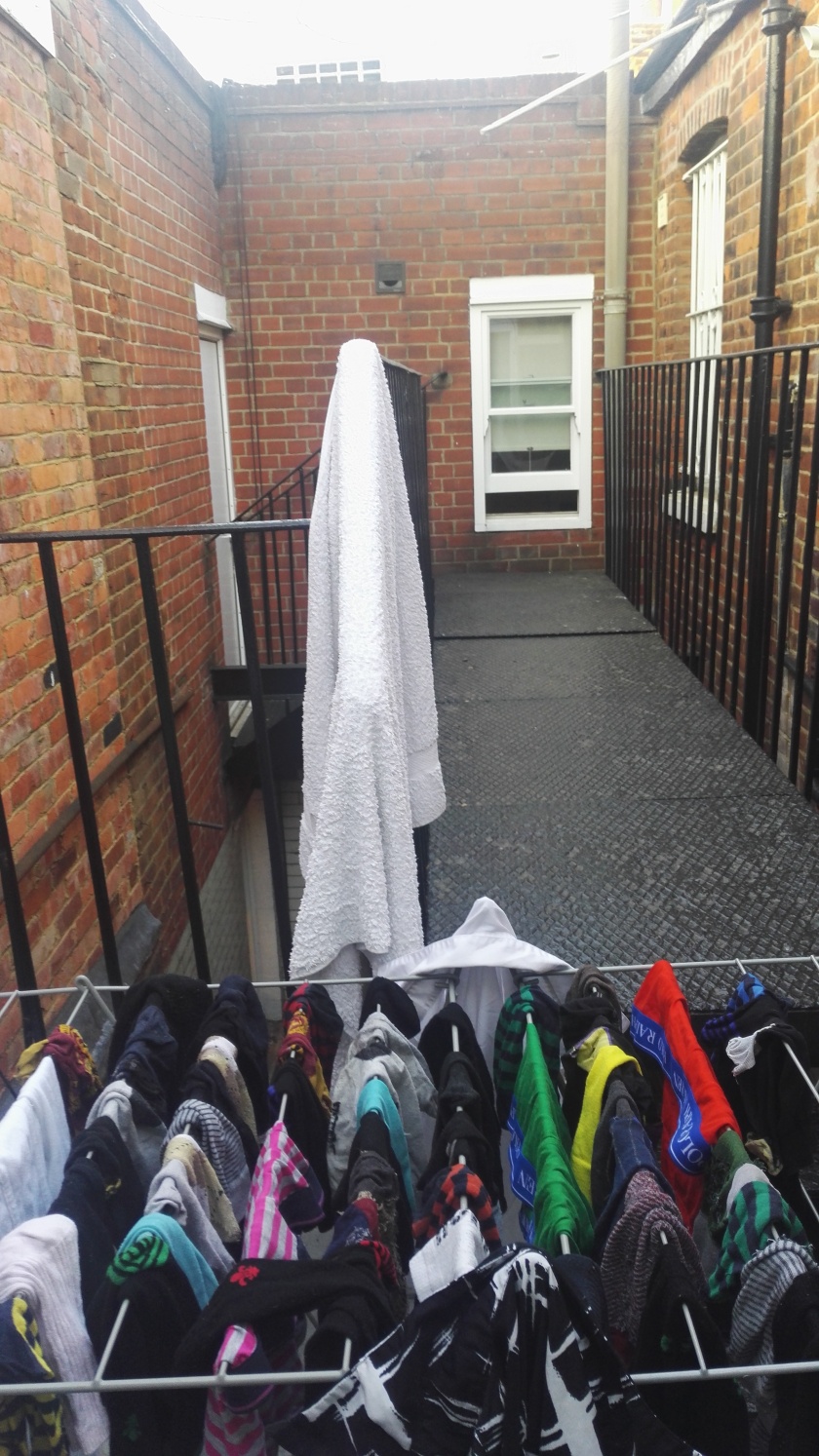 There’s a door in my kitchen that opens onto a thing that is referred to as a “fire escape.” The people in my block get extremely funny about it out there. They monitor its use. I had a “health and safety inspector” knock on my door once. “Excuse me, sir, is this your ladder to the roof?” “Yes. It is.” “Can you remove it. Someone could injure themselves on it.” “I could put a laminated sign on it saying ‘Be careful not to injure yourself using this ladder?” “No. Just remove it please.” “But what if there’s a fire in the stairwell? This is – notionally – the fire escape. It goes nowhere. People might come out here and realise they’re trapped. This ladder means they can escape across the roof.” “We have fire doors in the block. Any fire will be contained by the fire doors. Remove the ladder please.” I didn’t remove the ladder. Two weeks later it had been removed.

Today, this perfect May day, I did a load of laundry and left it on the “fire escape” to dry. I’m hoping it doesn’t get confiscated too. In the event of a fire anyone that found their way up there would be too busy trying to scale the last few foot of wall with their fingers and swearing about the fact there’s no ladder to be concerned about the obstruction of my laundry. They might even be able to stand on the laundry to grab the roof. But these health and safety bods aren’t thinking rationally. They’re working from paper. And you can never underestimate the capacity of a certain type of human to be obstructive. He wasn’t actually a health and safety inspector anyway. He was just some dude who works with the head leaseholder.

The major issue here is possession. They don’t want me to be seen to possess the space even though there’s a switch in my flat for a light out there so they bully me out of it. If I had my way I’d put a table there but someone would get weird about it very quickly even though nobody uses it or has access to it but me. I’m hoping all my socks are okay because I literally washed the lot and then had to put on the least damp ones to go out. The rest are air drying there as the evening falls.

I went mentoring tonight in my damp socks. Off to Somerstown to volunteer with a charity helping kids from some of the estates around that way. We wrote the beginning of a play about a lion in a diamond palace who wants to be the best by solving the impossible rubik’s cube. Then I walked one of the kids home to his estate, and up three floors carrying his musical instrument, and remembered this time last year and how so many people died partly as a result of similar thinking by “safety” people – “The fire doors will mean that a ladder is unnecessary.” Such arrogant thinking. That the thing we have made will defeat the force we cannot control. We are lying to ourselves. Just as we are still subject to death, so nature is still more powerful than us. If we war with it we will eventually lose. It’s going that way as the air turns to poison. But that’s probably just my hayfever talking.