So there we go. The launch of a new project. A load of people came to a church hall in Pimlico and threw some stuff at the wall. Now I’m sitting in my living room with Pickle, Anne May and gin. May is currently in the kitchen making a noise like she’s being exorcised, but I think it’s just wind.

Factory Macbeth. About 20 actors today. Apart from Macbeth, we knew who we were playing which was pleasant. Macbeth came down to either Scott or Maz. Two audience members played “scissor paper stone” – (an old tradition but still a good one) – and scissors cut paper so Scott was out despite his wife being in the audience. She had to put up with him playing Macduff’s child, famously played by naked Keith Chegwin in Polanski’s film. Scott did it with his clothes on, and beautifully, but it’s a tiny part. It’s a familiar pitfall with The Factory. There’s no point inviting friends/industry because you honestly don’t know who you’ll be playing most of the time. Marianne played Macbeth tonight though. It was joyful.

This company has been going for a while now. We work to our tastes, challenging ourselves to be simple while deliberately obstructing simplicity. I’m very proud of the work we did at the inception of this new project. We could’ve been simpler, quicker, smarter etc. But it was a strong start. We had a surprisingly full house, and some wonderfully involved and directional audience witches. I realised that wearing tights over my glasses in a hot room is a recipe for disaster though. I was playing Banquo, so I was dead after the first hour. In this show once you’re dead you’re back immediately with tights on your head as a physical part of the game. It’s not like trad 1950’s Banquo where you can get drunk in the interval and stagger on for the pageant. Notwithstanding that I looked mildly ridiculous with glasses on beneath my tights, cold practice time could not have prepared me for a room full of hot people. Almost instantly my specs steamed up with my breath, and they didn’t clear. The ghost of Banquo was genuinely dangerous because not only was it in hell, it was also completely blind and could easily have broken your ankle if it had got overexcited. Still I had the rest of the company around me and you are never alone in that group.

The show is an exploration of Macbeth, paying close attention to the language, doing it with minimum everything. What we have in The Factory is good people, skill and time. What we lack – deliberately – is budget. It’s a collective of working actors who come together and make stuff when they have gaps. We make it clean and in such a way that anyone can drop in to any part at any time so long as they know it. The only thing we have to make sure of is that all parts are covered. In this current iteration, audience members play the witches, and that’s joyful.

I’ve had a beautiful evening. My brain is exhausted. It’s been an intensive few hours, followed by a wind down and a little too much gin. The last proper Factory show I did was The Odyssey. If this project gives me half as much joy and fries my brain a quarter as much I’ll be happy. And it’s geared up to be a corker. Next show is the 8th. I won’t be Banquo. My best bet is Lady Macduff…

Here’s Al, one of our founders, attempting to tell people what to expect. 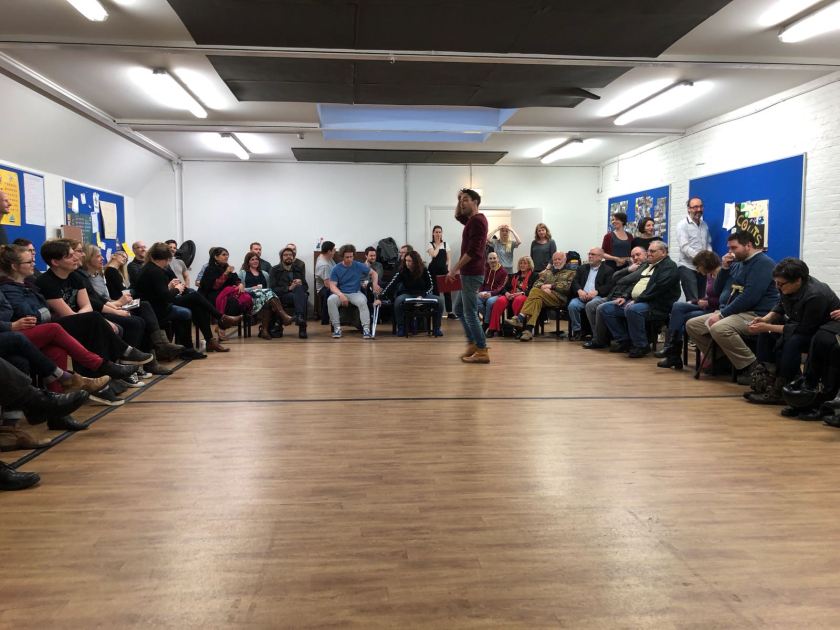