Today has been wonderfully relaxing. The quality of the produce round here is so high. I’ve been eating mozzarella and salads, tomatoes and beautiful cuts of meat, baked camembert and probably far too much prosecco because it’s €2.99 a bottle.

After driving to Como yesterday it felt justifiable to lounge in the villa all day today. We’ve been ambling around barefoot to a varied but excellent soundtrack. We wrote a murder mystery for ourselves just because it might be fun. That’ll happen this evening and either be a car crash or an entertainment.

Rebecca is convinced we’re all going to get murdered here, so it makes sense to create towards the fantasy. She’s running off classic horror movie tropes. 8 varied personalities having a lovely time in a villa in Italy. Friday 13th. Lots of weird stuff on the walls. Straps and cast iron pokers and so forth. It IS pretty odd here. There’s an antique sewing machine in every room. Old keys and irons are displayed prominently in the communal areas. There’s an autonomous mower that wanders around and tries to eat the things you leave. It hacked into a pool noodle yesterday and I ended up scolding it like you would a bad child. Then I tried to adjust his settings and ended up inadvertently shutting him down. I miss him. He’s just sitting there on the lawn, inert. We had given him a name. I hope he’s not angry with me for accidentally shutting him off.

The power to the villa cut off randomly in the middle of the afternoon. I’m hoping that doesn’t happen once it’s dark. It’s beautiful here but having written this murder mystery it would be weird to suddenly be plunged into darkness. Especially considering how the temperature plunges at night.

We are having a barbecue now, and I picked up my phone to write this and intercepted an email from my agent wanting a self tape for tomorrow in English and Hindi. They know I don’t speak Hindi but that doesn’t seem to have bothered them. It’s a very strange existence I’ve chosen. I have no idea how I’m going to pull that off, considering my Hindi speaking friends are all in London and I’m lounging around in a villa in Como. Still, I can certainly hack something out. But tonight it’s barbeque and the rest of this prosecco.

My dear old friend is also messaging me with phrases that he wants read into a microphone for a computer game pitch that he’s assembling. It’s already feeling a little like the random work world is trying to suck me back in immediately, as soon as I allow myself to take my foot off the gas and chill out.

To the extent that actually fuck it I’m going to put my phone back down for the rest of the night and just enjoy the good company and tasty barbeque without disappearing into this Hindi script. If they will contact me when I’m on holiday, with less than 24 hours notice and no mention of how much I’ll be paid, then they’ll get what they’re given…

Murder mystery was ridiculous fun. It was mostly cross gender and I ended up as Bianca Castafiore and also the murderer. I poisoned one of my biggest fans, stabbed the arsonist kid in the back, clubbed the Mafia Don to death and ran away, and gave a heavy overdose to the young woman that sang me a song. Then I managed to frame the chef and got away with it. All those times I’ve played werewolf paid off…

Here we all are… 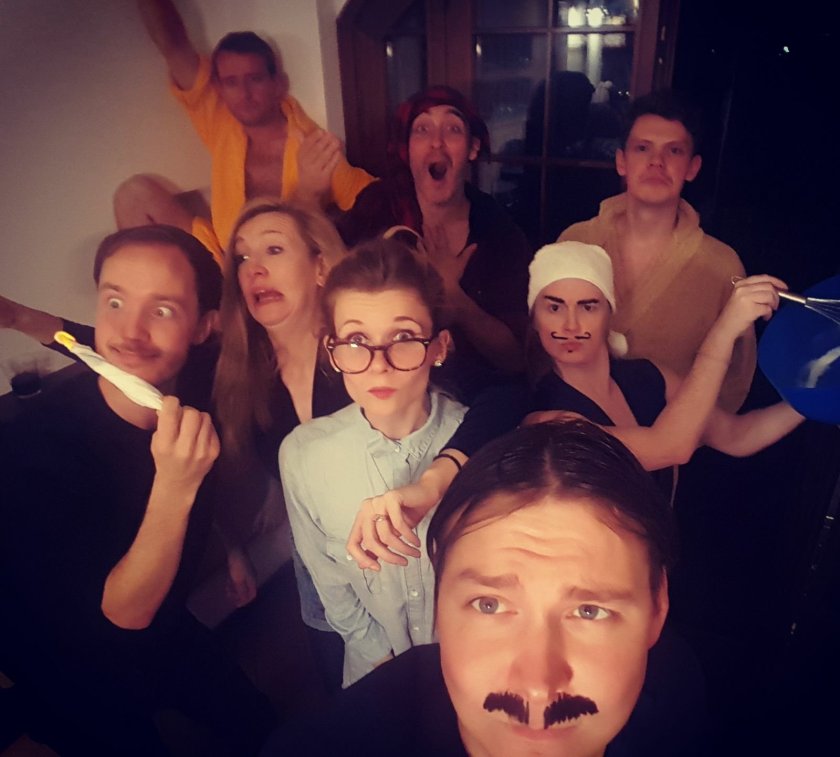