Up with with the dawn but for a different reason. I’m looking after my boy. Darren and I are still sharing a home. I can’t be asleep when he’s up. He has to be on the shuttle at 6 still. He needs support as he wakes. So I set my alarm, and went and jumped on him. I’ve just packed him out the door, and sent him on his way to that difficult room. Now I’ll write this and sleep another half an hour.

When the head is sick, the body follows. My experience in that room compared to a bigger room at Ascot – there’s no comparison. Ascot was hard but enervating. That room is just hard, and cruel. It comes down to the thing I blogged about some months ago. Libertarian vs Authoritarian. I lead in a libertarian manner. I don’t respect authoritarian leaders. And vice versa. You don’t have to switch off your personality to be capable of motivating people. You don’t have to make spot value judgements. These jobs are so short term. It’s foolish in the extreme to get our ego wrapped up in them, particularly at the cost of the happiness of those around us. Yes of course we have to be firm from time to time. But there are many people – and I’m one of them so I know – who do not respond well to being treated like they’re idiots.

I ended up Kitchen Managing a restaurant with plenty of different options. I had been told that the head chef was a difficult bugger, but as far as I was concerned he was Florence Nightingale. My day became all about lemon tarts and Caesar Salads. I got to know Esther, who was working her first ever job. She’s a medical student, and is studying in Russia. She wants to be a GP. I got to know the chefs. I got to know all the runners. There was fellowship, laughter even actual jokes. The head was healthy, the body followed. It’s like another world in there, a kinder world. And kitchen managing came back to me as if it was yesterday. The area manager remembered me from The Trophy Room a few years ago and made a point of saying how thrilled they were to see me back.

The day ended at a reasonable time and we all went to the beach and sat on a dune in time for the sunset. It was beautiful. By the time the guys from my old room had made it to join us, the sun was down. They got to sit with us in darkness and Emily lost her shoes.

Then eventually we went back to Pontins only to run into our tricky manager, winding down in the bar. We had a decent conversation. He asked to shake me by the hand at the end. I like the person buried inside him, but I have no respect for his front so I ended up shaking him by the arm like bad amateur actors do when saying “ah-HA”. I needed to keep my integrity. I’m really glad I held my ground in that regard. He is still in that room, causing damage with his attitude. I’m not going to support that by letting him off.

That’s why I woke up to help Darren get up and out. It’s not a happy place he’s going to, and so it’s only fair his roommate helps him rise and sends him out with positivity. I hope it’s a superb day in there for them. Much as I’d love to be there for my staff, I’m glad to be out. I even have time to hang out on the beach in the evening before the sun sets! Luxury. 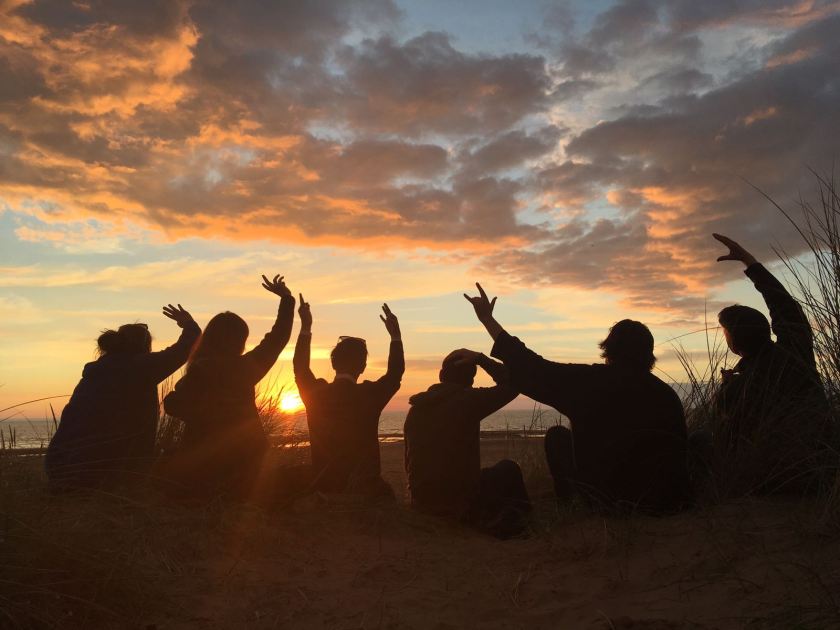