The Airfield Tavern. They’re not even trying to make it sound good.

As the sun goes down I’m wondering why anyone would come to this place as a destination. Maybe nobody ever does. But they’re packed for dinner tonight. It’s next to the Premier Inn where I’m sharing a room with a stranger who isn’t here yet. Non alcoholic beer for nearly £3. Blog. This ain’t glamour, this job. This is bones. But at least there’ll be money at the end of it. I’m saving up for a motorbike. I’ll take what I can get.

What is it about homogeneity? We live in a naturally incredibly beautiful world. We’ve poured concrete over it and we are so afraid of the unruly truth of nature that we try to destroy it utterly, forgetting we’re part of it. I know people who will push a carrot disconsolately around on their plate untouched because they’ve seen it come out of the ground with dirty mud on it, and then devour a whole pack of machine cut chemical washed carrot batons in plastic for lunch the next day.

Another night in Yeovil but this room could be anywhere – Liverpool or Frome. I haven’t seen anyone who isn’t white English outside of my co-workers. And I’ve seen a lot of people. I’ve never been to Yeovil before and I’ve still got no idea what it looks like. ASDA. Premier Inn. Generic brewery pub. All character has been systematically crushed here because “people like everything to be the same.”

There’s that famous conversation about MacDonalds in Paris from Pulp Fiction. “Royale with Cheese,” said with wonder. A difference! They’ve got MacDonalds in Hong Kong. Teenage Al ended up catching a rare pizza there because it was almost exotic. Two doors down he could’ve had incredible noodles for the same price, and still eaten offal but without the dressing up, but he was curious about the pizza.

You can contract a Big Mac even at the heart of the Negev Desert. In Guantanamo there’s an outbreak, contained with barbed wire. 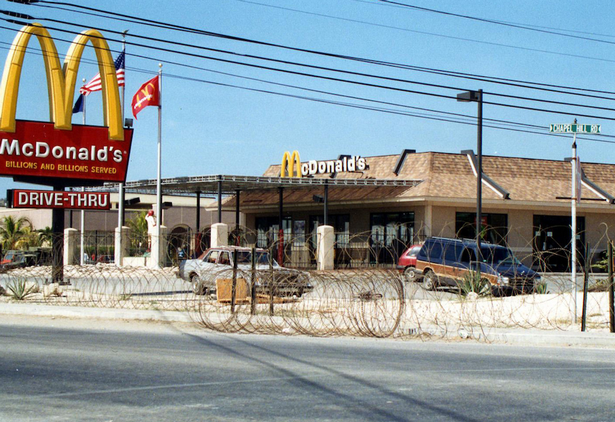 They’re still peddling patties that are roughly the same as the ones you get on both sides of the high street in some UK and US cities, where people sit in the windows, attention downwards, forcing antibiotic ground creaturebits into their gullets with both hands ten foot from the local café where Fil is watching them masticate, worrying about the rent but unable to compete with the price of a happy meal.

I’m as guilty as the rest – there ain’t no high horse here. I’m trying to eat better. Live better. Be more conscious. But I went to KFC the other day and guiltily scarfed the remains of thousands of ground up baby chicks bleached and bound with a tasty batter. “Yum” I thought, as I pushed it into my face while the Frankenstein Colonel lurched towards me approvingly. I could’ve been anywhere in the world and I wouldn’t have known any better apart from the language I spoke at the counter. And lots of people just shout in English anyway.

As someone who rarely if ever has the same morning, the same day, the same evening I just don’t get it, eating in these places regularly, going to the English themed pub in Belgium, drinking insipid American coffee in Rome. On a little island in Thailand I got angry to see a familiar coffee house on the high street I turned around immediately and got the next ferry out. You can do that sort of thing when you’re solo. It’s impossible to justify to anyone because it sounds ridiculous. “Why are we leaving?” “Starbucks.” “Al, there’s Starbucks everywhere. Calm down.”

I try to experience the culture wherever I am. And yeah, perhaps the Yeovil culture is fish and chips by the roundabout in which case I’m smashing it. But God this little area is depressing. Still. Money to be made, I guess. One step closer to the bike.

One thought on “All the same”