As part of the tidy up, I opened an old trunk, and it was a veritable oubliette. Stuff I had packed up when I left school and then just ignored. For decades. Old essays. Things I had written for the school satirical magazine that my friends and I made for a year or three. Terrible scripts. Awkward letters never sent. A photo of my first girlfriend and I at a festival. Hideously verbose and naïve short stories written long form, deeply inspired by Douglas Adams, fundamentally clueless about life, full of righteous indignation about human idiocy. Poems. Pictures and sketches, probably done in maths lessons. Self portraits… 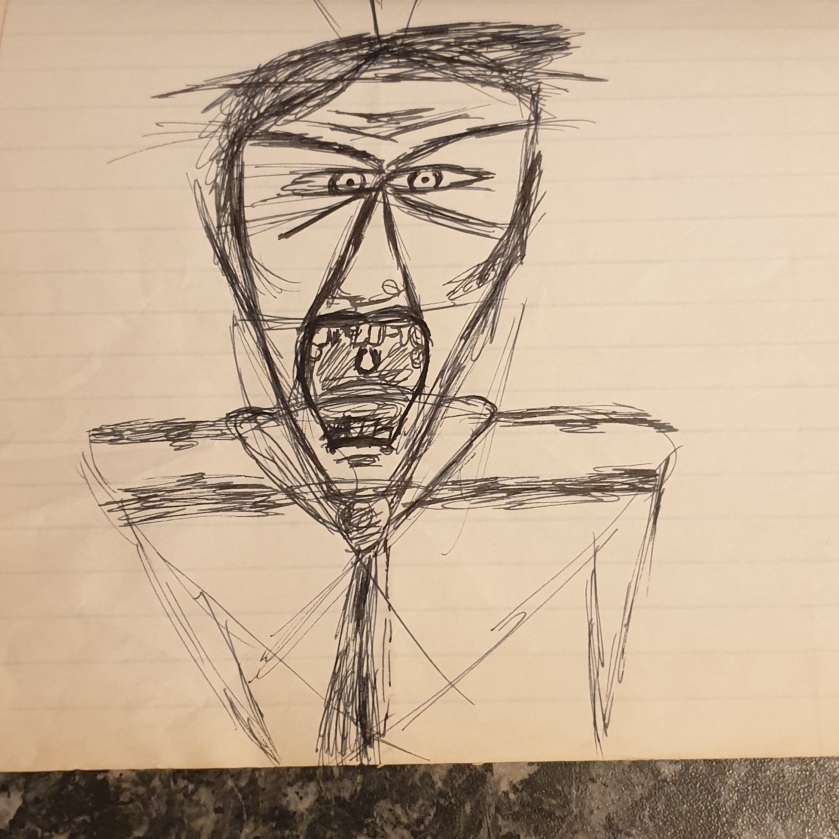 I read much of it today and could barely believe it came from my pen. There were definitely flashes of insight. There were well turned sentences. I was trying to keep my reader’s attention. But mostly it was transparent how little the author understood his subject matter. Sometimes I tried to write about sex, and it’s reverent and fumbly. Much as I would have been in person had any of those teenage fantasies translated into realities. In one essay I write the history of creation from the point of view of an angry self-styled outsider with tendencies towards unusual belief structures. People had to read that stuff. I chucked most of it, put an old photo on Facebook, and moved on. I didn’t miss it for 27 years. I’m unlikely to lose sleep over it. And that kid was an awkward entitled little bastard. But at least he had my sense of humour.

It’s useful occasionally to touch base with where we’ve been. I’m glad I hit that stuff and found myself thinking I’ve evolved. If I’d been hankering after the good old days I’d be disappointed in myself. “Adapt or die”. Someone commented something like “It’s good to remember the good times” and I had a physical reaction. Those times weren’t particularly good. They were just times. Why else would I have put them in a trunk for decades and severed contact with almost everybody?

Now I can look back and see the process I was going through. Back then I was just … going through the process, and a lot of the time I couldn’t see the wood for the trees.

Fuck. Still. I’ve made things better in my flat with help from my friends, and yet there’s more to be done. Tomorrow I’ll be getting into my bedroom at last, which is a sea of clothes and papers and books. Gradually I’m getting things to a stage where I can see where I am right now. Every parcel I send on eBay cuts a bit more past away, and helps me move forward to wherever the future lies. It’s not as hard as it used to be. I’ve started digging into my childhood geek stuff, my mum’s clothes, all these things that would’ve gone to landfill if I’d been moving house all the time. I’ve even started sorting my books. Taking some to charity. Recycling others. Slowly and steadily. It’ll take a long time to finish this, but it can work well around the acting, and it’s therapeutic…