My right leg swings round weirdly when I walk. I’ve been aware of it for some time as it’s my job to be aware of things. The problem is the distance between being aware of things and knowing how to solve them.

School: “Do you know why I’ve got you to come in here this morning, Barclay?” “Yes, sir. It’s because I have a great deal of potential academically and yet I’m squandering it through a lack of focus.” “If you already know then why aren’t you doing anything about it?”

I don’t know how to stop my right leg swinging round like I’m some sort of posh zombie. I just know it’s a weird thing my leg does because I observe my body. But I’m worried how it might exacerbate over 600 miles. I get into a conversation with the 80 year old father of my dear friend on this subject. Don is extremely mobile for his age. He looks at me with the eyes of a zealot. He knows the solution. “Go to the crocodile. The crocodile will help you. The crocodile knows.”

A few years ago this friend’s boyfriend was playing Peter Pan at the RSC in Stratford. She missed him. They’re in love. Now they have a beautiful girl together. Back then, he hitched a lift into London from rehearsal one night. He knew his girlfriend was having dinner at mine. He missed her. He told me he was coming but he didn’t tell her. I snuck him onto my fire escape when he arrived. Then I interrupted a conversation with her about how she missed him by saying “Hang on. What’s that sound? Is there someone… a boy … at the kitchen window? Can you go and check?” Flying boys, surprises, romance. Peter Pan. We are all young somewhere. Joy.

The world works in mysterious ways, and shortly after that beautiful silly evening the actress playing Wendy got sick. My friend did a lot of work in Stratford back then. She got the call to go up and be Wendy instead, which was a pleasant surprise for her boyfriend and meant I definitely had to shell out for a train to Warwickshire to see the pair of them.

That was when I met the crocodile. I met him in Stratford. Hook’s nemesis. The inevitable approach of age and death embodied in a ticking ancient reptile that has to be played by an actor with a body. No puppets here. This is a movement crocodile.

Show me the actor that doesn’t have a day job and I’ll show you the actor with a trust fund. The crocodile had to do some really really weird physical stuff on stage. He was terrifying. Inhuman. Sinuous. Fast. Brilliant. He had to do it day after day, week after week, month after month. And he did and he did and he did. You can really hurt your body permanently if you don’t know what you’re doing over a long run. The crocodile understands this for himself and others. The crocodile is a chiropractor.

And here I am standing in front of him in my pants. I’m lunging. I’m kneeling. I’m touching my toes. And he’s watching. Betraying nothing. Hard assessing eyes. Tick tock tick tock. He knows things. He sees things. He writes then in his computer. Eventually I lie on my stomach at his behest. He causes me pain. Three broken ribs in my life. None of them treated with physiotherapy. Tick tock. And finally the crocodile is finished with me. He pronounces his diagnosis. It’s arcane. He knows words lost to science. It’s all about the small of my back though, apparently. I bring in detail I thought to be irrelevant, about all the ribs I’ve broken. “Didn’t they offer you physiotherapy?” he says, flashing understanding. No. But still… Then is then and now is now.

I pay for a ball to lie on, and I pay the crocodile very gladly. He takes £57 but leaves me both my hands. I exit his practice.

Captain Hook’s crocodile is the inevitable march of time. This ticking thing that takes us piece by piece. And now I start to feel that. Tick tock. I need to be wary. My body is my instrument. And yes it’s a weird body. I’m a weird instrument. But I need to make sure I can play it and fight the crocodile for as long as possible. 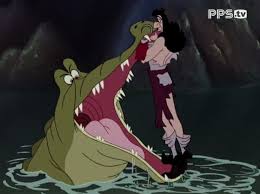