I am pumped with adrenaline. I feel like I’ve run a marathon, whereas actually all I’ve done is write my thoughts down and structure them ahead of sitting with a lawyer at 9am tomorrow morning. The problem is that the results of this meeting – I could look back on this as either the single greatest victory of my whole life, or the day that I had a chance and fucked it. “If only I’d gone about that differently.” That old chestnut. I very much want to avoid it. It’s not chestnut season, and I’ve had too much of that shit already thank you very much. I’m going all guns blazing for “Al Barclay you nailed it.” Send me good energy just after nine please. As with auditions I’m running myself ragged with emotions beforehand so I can be calm in the room. But we all know how the auditions have been going lately.

I’m going to try to prioritise myself and look at things squarely, despite all the sharp hard feelings that brings up. Now is a time for feeling things sharper. For getting things done.

This is where I was born. This is where the world feels right and the stones are the right colour and the gulls aren’t annoying because they mean home. I’ve been with people who have my best interests at heart all day, eating salad and drinking … water. My poor uncle’s possessions are calling my energy one way, the ashes of my mother are on a hill a mile or so from here, pulling me the other way. Tomorrow is twenty years since my godmother died and she’s here, too, in Trinity Church. People had a habit of dying back then.

Today I dropped off a load of my uncle’s old things at the Hospice where grandma died. Pyjamas and socks and underpants. They need them, apparently. I rang in advance. And shoes etc to sell. So … there’s a good deed. And tomorrow I’m going in to an unfamiliar situation to fight for my right to have good things come after all the collapses.

It’s lovely being back in the place where I was born, but I’m nervous about tomorrow. I have a history of people taking advantage of my naïveté and don’t want to fuck it up again with trust. I know where my universal trust originated (right here in this island) and I love it even now despite the people that have kicked it over the years. When I lived on this weird rock, the world was so simple. I was enjoying a protected and lavish childhood in a beautiful place. All those people long gone now – they were radiating love and kindness into my life. I was protected, in the good and the bad sense. I had the privilege to be kept safe. I honour the work that my parents did to make that possible. I wouldn’t have had it any other way. God I was lucky.

I still carry the trust that I learnt in those kind days where the colours and sounds and smells were right. Sometimes it brings good things. Sometimes it attracts spectres. Nowadays I am learning to put on my porcupine suit before running around in the clouds, but I still don’t like wearing the thing. It itches.

The tide is coming in. It is ten past six. I’m going to jump in the car and jump in the sea before we lose the light and get back to this later on.

In fact, I’ve written over 500 so I can chill out. I’m in St Aubin by the harbour having steak. Staying here tonight – it’s great. Harbour View. 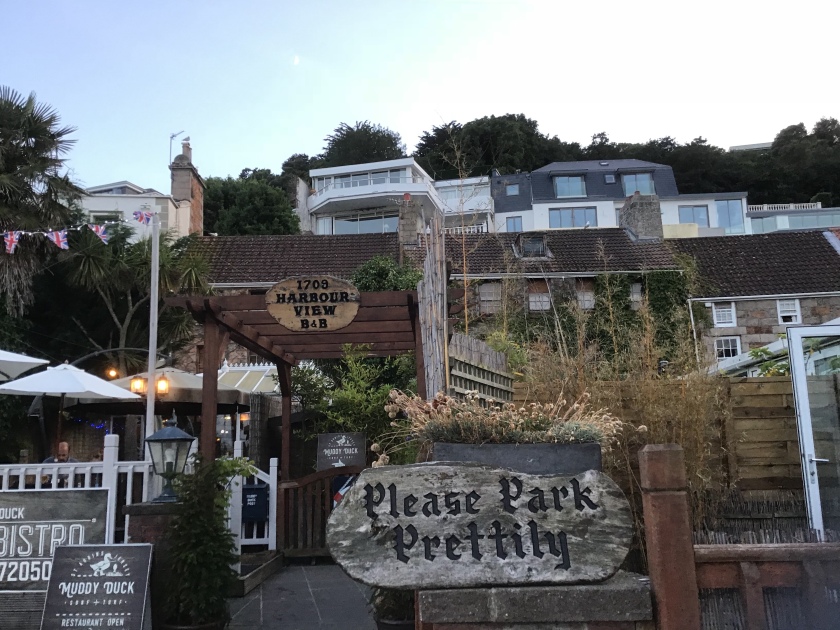 My suit is all laid out, I’ve talked strategy with Max. One more sleep. I found the most amazing bullshit briefcase in my uncle’s effects, which is going to be a theatrical mainstay for absolute certain, it’s one of the best props I’ve ever seen. I was thinking about bringing it and plonking it down on the table even though it’s empty, but my friend said “You don’t want them to think you’re an arsehole.” She’s right. She usually is. Dammit.

As my mother used to say, “Beam on positive” for 9am. I accept all spiritual currencies.