Out the back of the cold warehouse we are building into, someone has written “Send Help.” It wasn’t me. But it tickled me and it’s the only snap I took today. 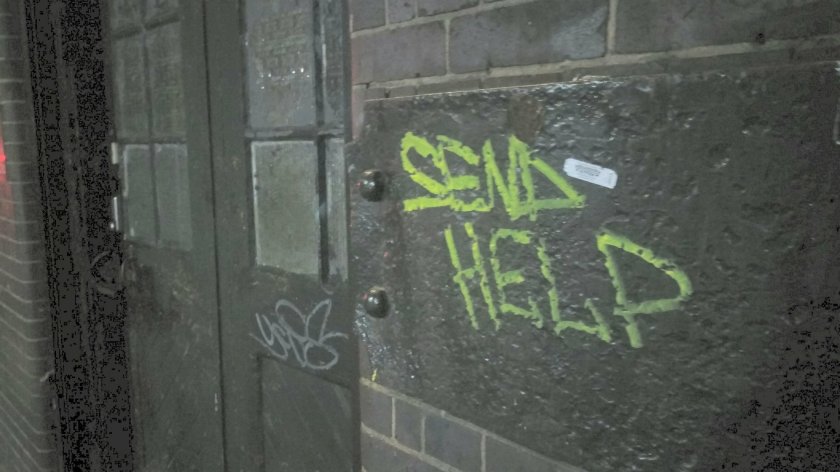 I was wearing my ski jacket with extra socks and walking boots, but I’m still sneezing my way home on the tube.

I spent a good few hours under a table taping wires to chipboard to get them clear of people’s feet. I’m very aware that they might be moved or replaced tomorrow, but my stomach muscles needed a workout and it was like doing a hundred sit-ups. Then I got my hands covered in blackboard paint and my hair full of fake snow that appears to be made out of nits. Many lovely people spent many hours freezing themselves in the dark to make shiny things.

Ladies and gentlemen – the magic of theatre. Lots of work by lots of people so a few people can make it look easy and take all the credit. It’s mostly been joyful, this build. And nobody has been injured.

In Yorkshire a few years ago I was doing A Midsummer Night’s Dream, running around, playing multiple parts in a wood. I quickchanged my trousers every night. Costume had pinned them up for sewing and left the pins in. I didn’t notice for ages. A week and a half into the run I crouched down and felt the entirety of a pin go into the top of my inner thigh, about an inch away from babies, in the hip join, mid sentence. I played the rest of the scene, then got out of sight slowly, favouring the other leg, and pulled the bastard out behind a tree. It was painful yet bizarrely satisfying, and had the effect of elongating time. In my memory the wrench of pin on flesh lasted ages. My skin rubber banded weirdly far as it tried to cling to the metal. No wonder they say pulling a sword out does more damage than sticking it in.

For me, I changed my costume into Peter Quince, ran for the next scene, muttered “I just got a fucking pin in my crotch” to one of my fellow actors who looked at me blankly, and carried on. I didn’t really think about the pain until the show was over. I got the rest of the pins out before the next show. There were four. The next time I played that scene I was acutely aware when I crouched, worrying I’d missed one. I hadn’t, it didn’t go septic. I thought no more about it, as no real harm was done and it didn’t hurt that long. I’m using it as a personal illustration of what goes on constantly in this job.

About two years ago a friend of mine went through an unsecured trapdoor and fell about 15 foot in the dark. He landed on his feet like a cat between a piano and a pile of chairs. All that acrobatic training paid off. A guy I met got stabbed hard in the back with a letter opener playing Julius Caesar at Edinburgh and it only just missed vital organs. It was supposed to be retractable but it was the wrong one. As far as I understand the audience knew nothing and he got himself to hospital. A friend of mine had her fingers slammed hard in some hinges in front of me. Another got hit in the face with a broken bottle. Things happen all the time. If nobody dies, it goes in the show report and that’s the extent of it. One actor I was working with on a short film was on harness. While he was grounded, the bar from the harness came out and fell from the flies (way up) onto his head. Big steel bar. Wham. It was a film shoot about theatre going wrong. He went to hospital concussed. They kept the shot and – of necessity – wrote the character out and fixed the rest in the edit. All in all they lost an hour. It would’ve been the same if he’d died.

Another friend once had a striplight fall on him randomly in rehearsal. He went down like a sack of spuds. “Are you alright?” we cried. He assessed the situation, regathered, and quipped “A bit light headed.” Light. Headed. Ow. That’s the dark joy in this job. We might get killed. But if we don’t we’ll find joy and apposite puns.

I’m trusting that this build will be fine, of course, or I wouldn’t be blogging it like this. It’s mostly that there’s this actor called Al Barclay on it. That worries me. I’m told he’s alright at taking care of other people. The audience should be fine. But apparently he expends most of his energy sabotaging the actor playing Scrooge…

(In all truth, I’m thrilled to be part of this process. This should be a bloody brilliant Christmas show irrespective of my technical skills or lack thereof.) There’s a link to tickets in yesterday’s blog, and if there’s a number you can call I’ll sort it out ASAP and post it here. 🙂 X