Yesterday I wrote about feeling sad. I was a little under the weather and I felt the need to talk about it in public.

This morning I woke up to hear that a man had taken time to build an explosive, crossed Manchester, waited for a crowd and blown himself up at the exit of a gig attended mostly by girls and young women. It’s hard to even contemplate it. My petty daily worries fade into insignificance.

I don’t want to call the perpetrator a “monster” because a monster has power. This guy was a total coward. I don’t even want to start trying to fathom the  chain of events that led to him planning and executing this.

I’m sure the media will pick over it all in close detail over the weeks to come with headlines like “The making of a monster” and big pictures of him looking weird and his victims having fun with puppies. It’s a huge psychic shock when something like this happens close to home. It will subtly affect how we all think when we’re in crowds, for a while to come. I wish it wouldn’t, but it will. If we’ve seen someone struck by lightning, we are more concerned when walking through thunder. I’ve always been a little more aware of crowded tubes since I said goodbye to my girlfriend as she got in the tube to go to work on the London tube bomb day and then panicked until I heard from her.

The village is under attack from the monsters in the trees. This will be used by individuals just as misguided as the perpetrator to justify acts of hatred against people who might be associable with the guy that did this. His dark work will punch a hole in the air. Bad things will come through that hole. We must combat that.

I like that much of the social media I’ve seen on this bombing has been talking about how people in Manchester are clubbing together, donating blood, making cups of tea, driving people home. Surely we have to try to come together and not apart, so the socially awkward misfit who feels ostracised is included and welcomed rather than left alone to contemplate perpetrating horrors.

This evening I went to The Globe, and entertained people with sonnets and snippets. Gyles Brandreth was present, which surprised and pleased me. He came to see me as Malvolio in Edinburgh many years ago, and was wonderfully positive and supportive in the months after the show. It was good to see him again even if I was working. We did our best to make a lovely night in a crowded room.

All of us must continue to go about our business untouched by the actions of this lonely misfit. We can’t constrain our movements or our natural behaviours. The monsters in the woods feed on our fear. Occasionally a mixed up human does a horrible thing and destroys so much trust, so many lives. If we react with fear it empowers his deluded intention. Please come together now. React with love. Here’s John Cooper Clarke (on climate change) but still –

These are the days that matter.

The dangerous rays, I would argue, are the tendrils of fear and hate that will come out of this hole that is blown in Manchester. Let’s gather together to try to close it quickly if we can. Meantime my heart hurts for the loved ones of the victims. For their families. I’m writing this is the shadow of St Paul’s Cathedral, returning from work so I thought I’d take a picture of that. 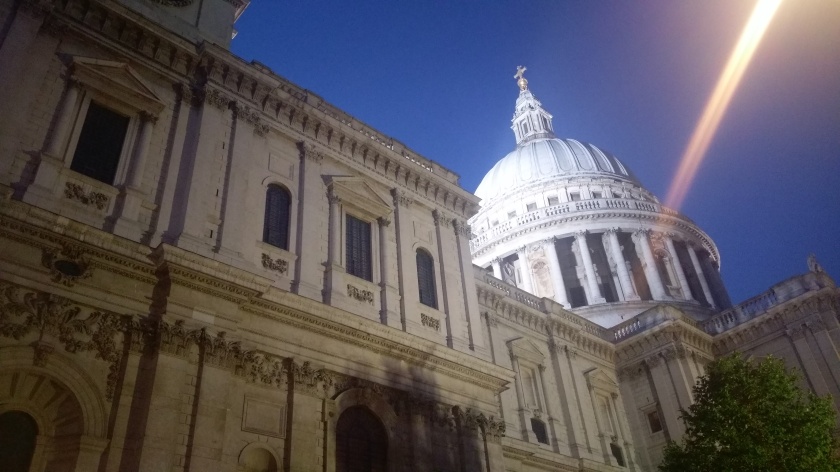 Be kind. Be generous. Try to act without fear. X