Day 6 and the skies open. Sheets of hard rain batter the little hostel in Venice, shorting the fuse and killing the wifi. All the people in the hostel that were sitting around the table watching the news on laptops stand up blinking, unsure of who they are, and in hushed tones talk of leaving the building. But it’s raining. When it rained hard, one of my parents – I forget which sadly – would say “The Angels are Weeping.” It happens all the time in stories, when terrible things take place there’s a storm. I keep following the inauguration on my US phone and examine that unfamiliar word. In-augur-ation. An augur is an omen. “A putting-in under omens.” Trump is being put in. And it’s pouring with rain in California… At noon I check out the window for a flock of bats.
Today I’ve started to use an American accent when talking to strangers, so now there’s no more of the hapless Brit card to be played. My first conversation at the coffee stall goes acceptably even if I probably sound like Welsh Mexican. We talk about Revelations in light of the apocalyptic weather. I’m getting away with it right up to the end when having stirred my latte I ask “Have you got a bin to put the rubbish in?” “Whut?” “Oh … gosh … I mean Is there a trash can?”. Damn.
Shortly after the inauguration speech I get a message on Facebook. “Are you still looking for a room?” Boom. I say yes before I even look to see which of the million messages I sent bore fruit. It’s an antipodean couple, one Aussie and one Kiwi. I go to meet them in Larchmont a long way from Venice, 20 bucks in an uber. Screw that. Today is the day when I finally have to accept that I am going to need a car here. I really am. An hour and a half on the bus to meet them and their dogs. They are lovely. We get on really well. I’m moving in immediately. An hour and a half back to get my stuff. An hour and a half with my stuff back to their place. 4.5 hours on buses. I almost read a whole book. But now I have a big room with a door in it. I have a bed that is mine for 2 months. The room stinks of dog but I’ve been looking for an excuse to get an essential oil diffuser and I saw one for 15 bucks in TJ Maxx. And both Laural and Mark seem lovely. And the dogs!
They have three rescue dogs, Marley, Janey and Roger. Marley is my friend immediately. He has seen things. He was a bait dog in dog fights, and was left for dead in an alley. He’s covered in lesions and scars. He’s a survivor, and has the calm of one. Janey is alert but friendly, and only Roger is wary but I know it won’t take him long. In fact he just jumped up on the bed next to me, and is sitting on my leather jacket. Perfect photo opportunity. Laural gave me the beard kit in the photo, as she had forgotten to cancel a subscription when Mark had to shave for an audition. Ahh yes. Auditions. That’s part of why I’m here. And now I have a doggy launch pad… 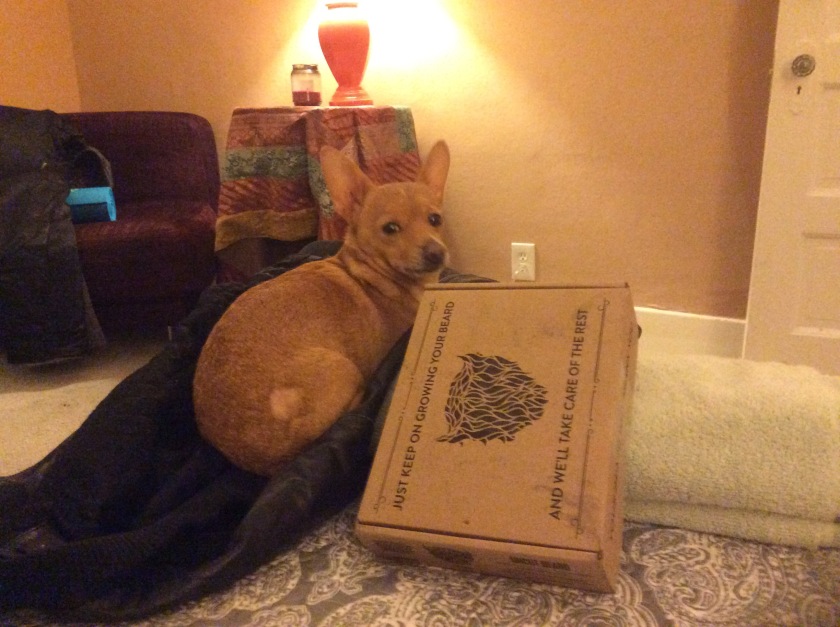 I have the weekend to get my freshly edited reel on Vimeo, shots are in place, Monday is my first official day in Los Angeles.

One thought on “Augurs and Antipodeans”