I don’t think there’s ever been a time in my life where I’ve been more aware of astrology. This is partly because I’ve had time to fuck around and pick up charts and make sense of it all. And partly because as soon as you look at it you realise there’s some very unusual stuff going on right now compared to normal. There’s always this and that. But this … well, this – it’s a lot more about that than it is to do with this. This is lots of THAT. But what the fuck is THAT?

But I promised you some sort of astrology… This is no expertise. This is an understanding, half received, half cobbled together. Nothing more. Don’t set fire to me.

There are five planets now in retrograde. Mercury just joined Venus, Jupiter, Saturn and Pluto. (If you count Pluto as a planet. I do. But I learnt the planets before 1986 so I still call Uranus to sound like “Your anus!” instead of “urine us!” which they literally did to try to stop children giggling, the fools.)

Today is day 1 of Mercury joining the retrograde, but it’s not all bad news, he says, and means it.

But hang on a second. Retrograde? What does that even mean? I hear that shit all the time.

So we are all careening around in space, in the gravitational pull of our small sun.

The way we perceive the planets around us is affected by our orbit in relation to their orbits.

(The moon is a different fish, of course, as that’s trapped by our field – don’t think it it for now).

With the planets (and with Pluto, fuck you) we are all turning circles in our orbit around Sol. We are all mirroring the rotation of the sun too, so in terms of what we’ve made up to make sense of stuff, we are all going anticlockwise – if we were using the sun as North Pole. I’m just dealing with the direction. today. We orbit in a direction. We also spin on an axis. Don’t go crazy thinking about the spin. Focus on the orbit. (Because hooooey there’s some crazyass spinning on the axis going on in our solar system. I’m not covering that for now – Venus and Uranus I’m looking at you.)

I’m on orbit. Annual rotation round the sun. That’s my jam. That’s where we get the whole retrograde thing. That’s what I’m trying to explain when I stop swearing.

Proximity to the sun affects time taken for an orbit around the sun, obviously. We are third from the sun, after Mercury and Venus.

On earth we make it round in 365 days and a bit – (hence leap years). Mercury only takes about 88 days. Venus about 250 – (we are close. Shame it’s made out of acid). Mars gets about two years for every one of ours. Jupiter takes about 12 years for 1 Earth year. Neptune takes over 150 years for one and Pluto staggers round in close to 250. So we are all spinning alongside one another, but sometimes in the spin, based on our comparative orbits, it looks like we are getting further away from each other, then closer, together, apart, together, apart. I’m hoping you can picture it.

This is the beginning of why we’ve probably heard of “Mercury retrograde”. With its close proximity to the sun, Mercury is the planet that goes goes in and out of “retrograde” the most frequently, which is annoying as it’s well named, after the swift-foot messenger – the giant killer – the communicator.  When it pulls away perhaps it pulls our communication skills away, if these ancient names came from ancient wisdom, as I’m happy to believe they did. Perhaps we communicate better when Mercury is running alongside us than when he appears to be pulling away.

Mercury and Venus retrograde are of course the most frequent and short lived, as they are closer to the sun than us. No surprises. Love and communication.

When you get further out then the in and out periods last much much much much longer and it’s very much either in or out. But for today both of the quick planets are retrograde, and so are Jupiter and Saturn and Pluto (and Neptune is trailing off soon as well) so the only planet running alongside us is Mars. The killer. The planet of cutting.

Communication has just got harder with Mercury. Love is going backwards with Venus. Old established systems have been in decline with Jupiter. Responsibilities are long waned with Saturn. But we still have innovation with Uranus. For now we have the huge power of instinct over time – the sea – from Neptune.

And we have Mars, very near, visible in the constellation of Pisces from our viewpoint. The warrior is fishing. Pulling interesting things out of flow. And cutting through a lot of the crap.

But next constellation is Ares. Mars’ll be there in ten days. Mars and Ares are basically the same force, but different aspects. The Ancient Roman will go into the Ancient Greek established power. And he’ll go in supported by creativity and instinct. And just like he has been in Pisces, he’s running with us at the moment and he will try and cut the stuff that isn’t helpful.

This could be a good fight coming, internal or external. But we have to be energetically ready.

If ever there was a time… 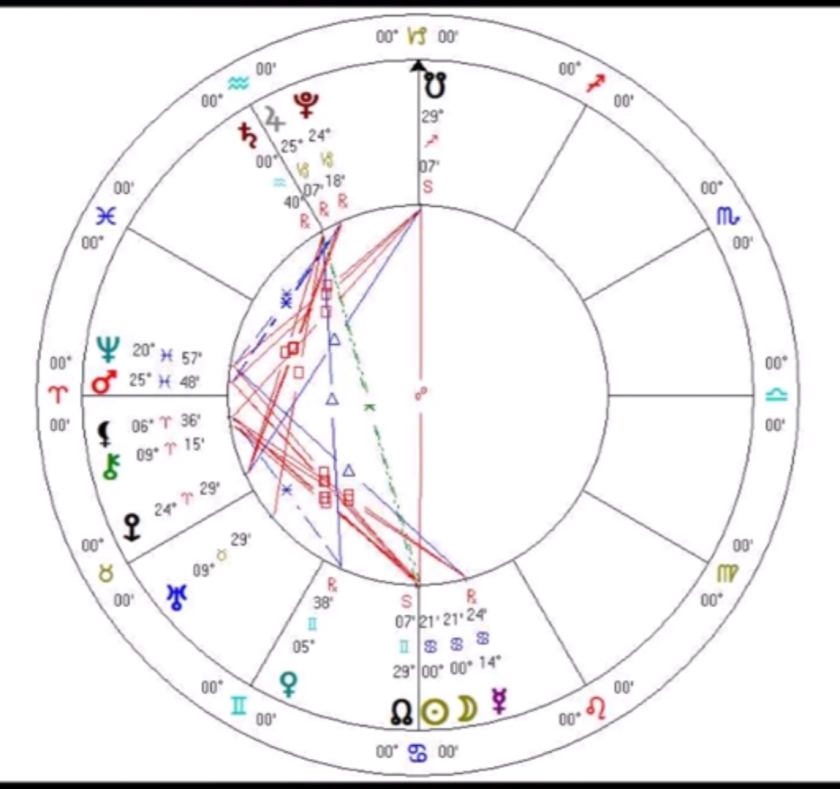