I lost the waking day to a hangover. The headache took over my whole being. I couldn’t think beyond it and somehow the codeine wasn’t working. I’m blaming dry January. My liver, at high efficiency, processed everything I threw at it last night. And last night I was compartmentalising the high profile job where everyone worked their socks off for a room full of indifferent billionaires. Which involved lots of booze and dancing.

I finally took myself into the light in the afternoon and started to stick myself back together as best as I was able. Then went to the van.

“You guys are like siblings,” says Jethro about Mel and I. We really are. I’m definitely the younger brother. I bitch about her but it’s because I love her. We’ve made a lovely thing together and it’s sad that we finish this wave on Sunday. Tonight was strange and beautiful, as always. But one guy used his magic drunkpower to make shit hard, and he did it on purpose too with his amdram crap.

I had an unusual audience of 4 lads. I have no idea if they paid or not. It was an unsold show and fifteen minutes into it there was a knock on the door and four people were there like they’d been waiting. I think they might have been no-shows from earlier. Three of them were into it but the nearest one to me was playing catastrophe drunk. He refused to write his name in the book right at the start which was an alarm bell. He wasn’t going to play. He was there to fuck it up for his own reasons. His whole energy was about “no” from the outset and he backfooted me by behaving like he was being let in late. Little twerp. At one point he genuinely tried to secretly pretend he was a vampire in a way that he knew I’d hear. Which sounds like playing, and could’ve been fun, but he was so utterly shut down that there was no play in him. It was just an attempt at a wind up. He seemed to assume I was precious. I did irresponsibly sent him in to Mel immediately to get rid of him for a bit so I could frame the show for his friends without him loudly bulldozing everything. I’m not precious but I can sense an asshat. She rebounded him immediately (he tried to get his balls out for her). He’d just had a vasectomy.

I wasn’t going to be precious about my content. He wanted to make it about him and that’s what his friends the audience wanted too so I let him derail most of the narrative and fed him whisky as he monologued. At one point one of his friends said to him “look, you’ve been breaking the fourth wall repeatedly” and that was the biggest disappointment of the night. That his friend thought there was a fourth wall to be broken. They were worried there was a world to break. I would’ve said “No, your friend is just behaving like a moron and I don’t like him, so I have no inclination to share nice things with him.” You can’t break the fourth wall if it isn’t. But you can be a drunk geek, and make it shitter for your friends.

Grrr. It’s for the best that he can’t breed anymore. Maybe constant pain down there stimulates testosterone production in the short term and brought about his shit behaviour. I’d like to be compassionate but he was just so arrogant and it honestly felt like he thought he was deliberately ruining a bit of trad fourth wall theatre. I hate self importance, but underneath all the amplified booze was a child who realised early that he was cleverer than his mummy and hasn’t quite worked out how to socialise that knowledge into adulthood.

Before and after him we had nothing but beautiful interesting people come through. Writing this tonight has helped me notice how the negative things stick in my memory easier than the positive. Just one guy who was compensating for something has derailed my blog tonight. Giving the twerp a platform.

The last show tonight brought five huge and deep friends, with whom I’ve made work that I’ll always be proud of. Some of my Factory family. They had been worried they wouldn’t enjoy it. They totally got it, and the dialogues within and after the show were great. It made up for that one idiot in spades. Here we all are. 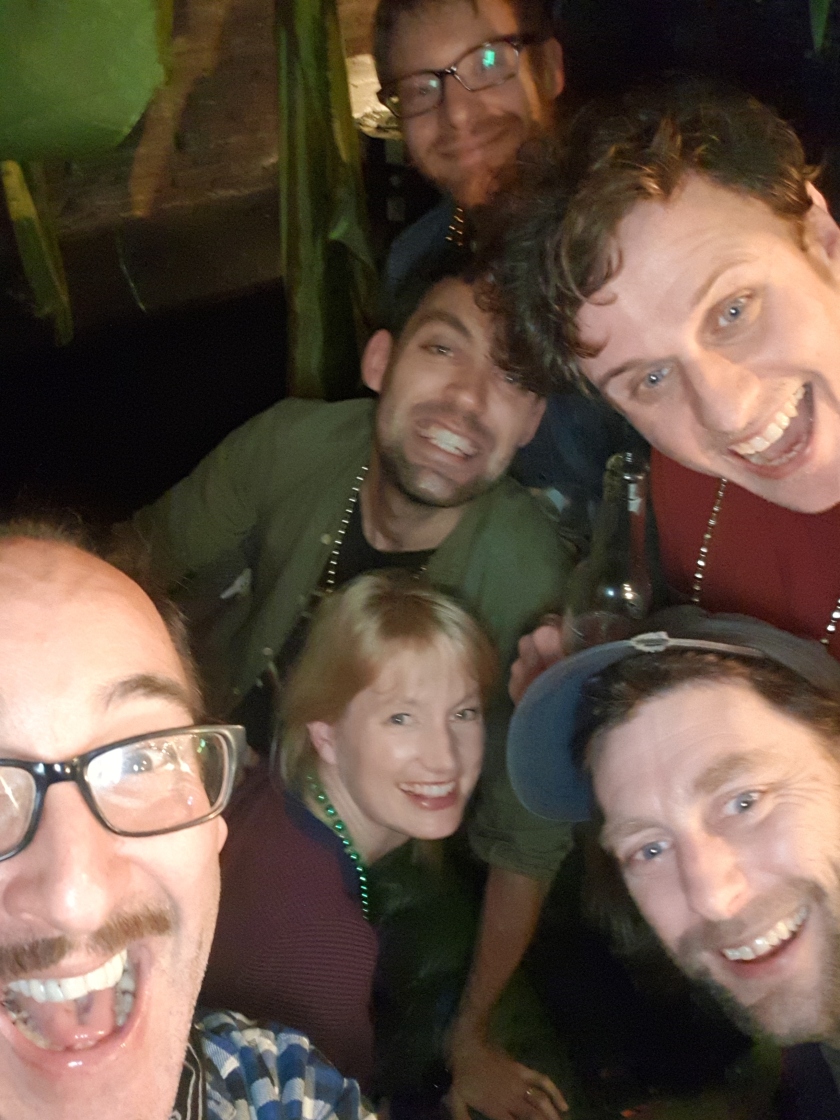 The annoying guy was useful lesson. I’ve been having some thoughts about how to compartmentalise someone who comes into a show with no fourth wall and thinks he’s doing jujitsu when he breaks it. It’s likely never going to happen again, but we grow or we shrink. I could’ve managed him better perhaps. But he set out to fuck it. I don’t understand that sort of thinking so I can neither be compassionate nor effective in managing the thinker.