Before the show tonight the three of us stood in the State Room doing mathematics for what felt like hours. We had more audience than we knew we could fit, with no clue how we were going to seat them or feed them or be visible to them. And we are all tired. At one point we were so confused we said we might have to do the show in the round. That didn’t last long as an idea. Here we are going mental. 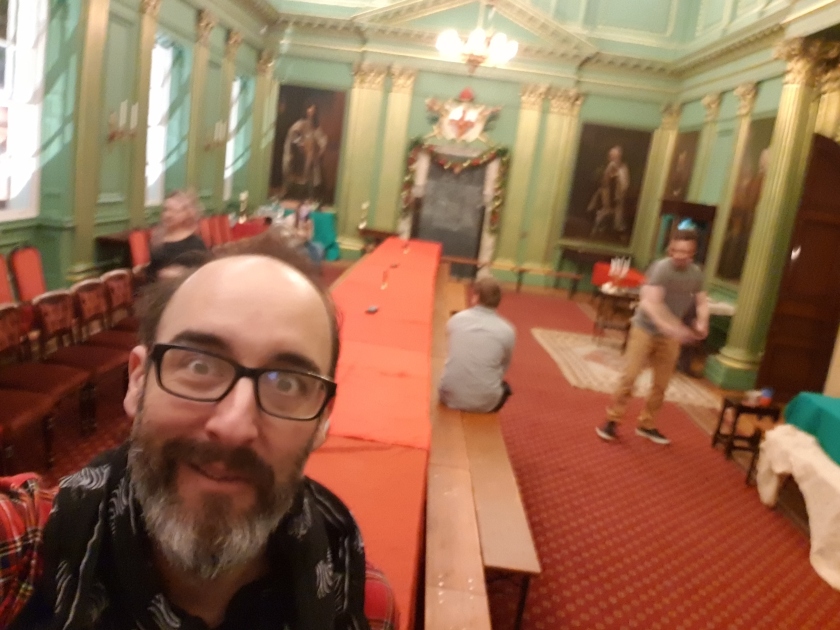 Our adrenaline was pumping early though, so we were doing things faster than we were thinking about them. We unrigged the sound, shifted the table and rigged it back again. We were trying to imagine every possible eventuality of troublesome audience member. After going round in circles we went with the most simple solution and made peace with the fact that if anything went wrong we’d solve it live as we always do. But by the time we arrived at that we were still in our normal clothes, we hadn’t done our preshow checks, and the audience was about to walk in behind us. Frantic lighting of candles and back into our little tiring room to wonder what we had forgotten to set.

Our tiring room is full of antique porcelain and silverware. There are beautiful teapots screwed into tables, and cabinets of plates and cups that almost certainly have a dynasty connected with them somewhere in China. Scenes from unfamiliar stories, hand drawn and repeated, where copies look much the same as one another but are subtly different. We were looking at them before the show, trying to guess the story. “This is the one where Fatfingers jumps out from behind a tree to wave his impossibly big hands at the bored couple.”

I found myself thinking how our shows subtly change but tell the same story every time, like these handdrawn plates. Our shows won’t be kept in a cabinet though to inspire that thought 700 years later. Our shows are gone in a flash, but perhaps live on in memory. We’ve had a few people tell me they’ll remember it for the rest of their lives, which is wonderful and kind of them, but our lives are short. I often look at old theatre programmes and wonder about all the unfamiliar dead names. Who were these people, so driven by the generation of something ephemeral? My brother is a curator at a major museum, preserving vast knowledge for posterity. I’m running around the streets of York in a nightie wishing people a Merry Christmas. I’ve done this for five years now, and I never get tired of the shows. There’s always something new to find. Jack and I were tweaking right up until the end of the run, tonight, with this big audience. But now it’s done, and we carefully and methodically took everything apart after the show, and loaded it into two garages. That room is as if we were never there. Tomorrow we go back home separately. And that’s that. We are done. Another year.

Luckily, after all our thinking and maths, the audience loved it and nothing went wrong. Perfect last show. I’ll probably miss it now. Real world tomorrow. And actual Christmas.