Huge great big audience full of women. Jack and I were hopelessly outnumbered on stage, although Sam behind the scenes and all the bar staff were women. It was one of the funnest groups we have ever played to. They were here for the Breast Cancer Uk Christmas Party. Behind the decision to bring them here was a bloody glorious woman with an ammonite necklace who had seen Neverland last year and persuaded people it would be a good choice to see another show by the same company. Lots of audience were very shy and didn’t want to be put on the spot, but we’re used to that. We don’t single people out unless they’re obviously up for it, or if they’re disruptive or late. This lot were not disruptive, they were just gobby in the best possible way. The only way you can be disruptive is if you deliberately break world, as happened occasionally last year: “Excuse me, actors, I’m cold. Can you get someone to get a heater.” Out loud in a very quiet moment as if that were possible and we were the right people to ask. That person can eternally go fuck themselves. Nobody would be so self regarding up here. (Scrooge just told her to go back to hell, and then a producer who was there told her more or less the same.)

We get some great heckles though. Scrooge was told at one point to smash the patriarchy. He also asked in a game of Yes/No whether he was a man, and was told that gender is about presentation and they couldn’t be clear about what he felt internally. When he pressed the issue he discovered he definitely presented as a man and grew excited by a whole world of new ideas.

This lot were being deliberately and brilliantly screwy with Dickensian assumptions. Some of them were giving me so much shit by the end it was hilarious. Scrooge is protectionist and old fashioned, clinging onto safety and afraid of “other”. It’s much nicer when people try to educate him, as it helps him in his cognitive leaps later on. We both had a great fun night tonight, as did the whole audience.

It turns out that we have been very well recommended in The Guardian, which I had no idea about. It was in an alternative What’s On section.

All of our notices have been fab since we kicked off too, so we’ll start packing out now. The woman that flinched when I repeated the Now Then journalist telling me that “Christmastime is about getting shitfaced,” – she wrote one of the most beautifully considered reviews of this show I’ve ever come across, for The Mature Times, and she spelt both of our names right. And the Now Then journalist loved it too despite Scrooge singling her out as the alcoholic…

Afterwards tonight’s crowd showed me screenshots of the Guardian recommendation that had brought them all there. Great that we deliberately party with the audience after the show. We got twenty women to bundle in for a silly video so we could send it to the shows producers, and then I got some of them to do a selfie with Jack and I for this blog. 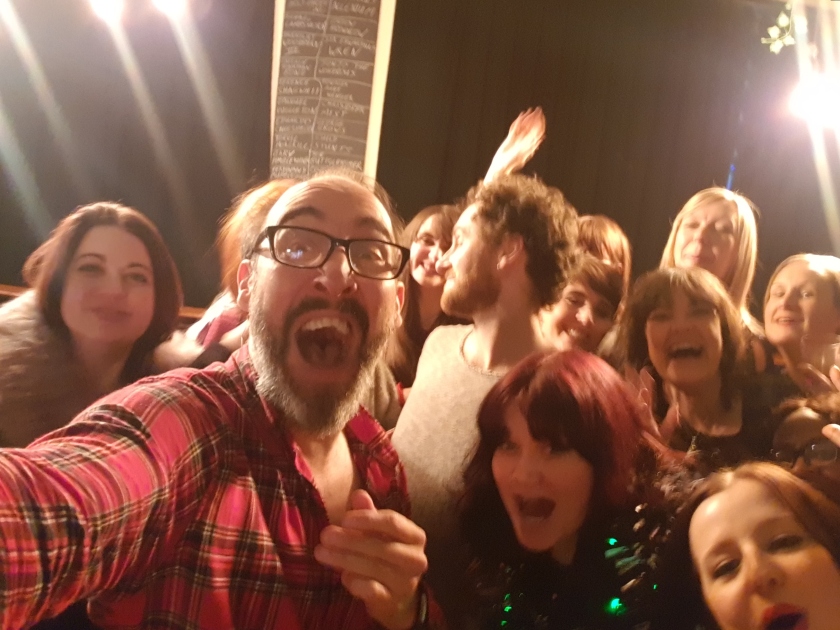 Doing this show in the North feels like a homecoming. Two shows tomorrow. Lots of people. We are gonna be knackered by the end of it. Bedtime now.