Another day of sheeting rain, and my favourite quote from Shakespeare springs to mind – “there is nothing either good or bad, but thinking makes it so.” I was ready for a day of long miserable cold. I got one. And it was ace cos I wanted it to be.

First I got wet, and discovered as I was walking that I didn’t really care. It helped that I had flushed out the cotton and replaced it with quick drying thermals. No wonder they cost so much money at bloody Mountain Warehouse. I was not chattering toothed and not soaked to the bone at any point, unlike much of yesterday. Still it was hard in the rain.

After walking for approximately 4 years we arrived at the first stop. Juliana was there already. The Book of Wisdom. Generations of pilgrims, towards the end of their journey, sharing their lessons. Typically of the world, the book had got soaked and largely ruined in the year since Julianna had seen it. Much of the wisdom was lost but there was a random distillation remaining. Sad but still beautiful. I had been excited to see the book in its full glory. She had very efficiently sold the idea to me. But gone. Yet another reminder of how we have to let go of our expectations. Everything is temporary. It just varies by degree of temporariness.

We sat around an oil drum with a few smouldering sticks in it, alongside a bunch of wet strangers from all around the world trying to fight the arrival of winter, steaming, all of us, as deep set wet escaped from our multiple layers and we returned to some short term semblance of warmth.

We stayed there too long. Luisa was waiting for some dude that gives therapy by hugging you, but he wasn’t rushing and an hour and a half was long enough. 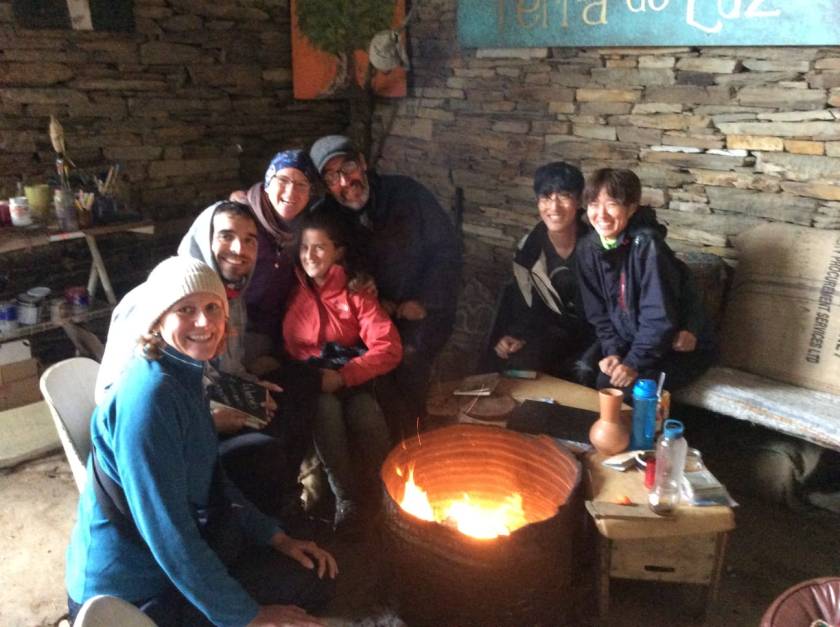 Good that he wasn’t rushing but I wish he had a sign up sheet.

We moved on. But the hippy train was still rolling. Half an hour later we were in The House of the Alchemist, and Luisa was bouncing around looking at crystals. I found a hot room with an aga and a table and before I knew it I was the tarot reader while my boots dried. “The French guys” had brought the means to make paella. It was cooked by one of the volunteers – (pilgrims frequently stop en route for a month or so and cook and clean in a donativo place – they’re beautiful and it’s tempting. It’s just pleasant people making things nice for pilgrims in exchange for donations. They get a place to stay and a transient community. We get a bed, food and whatever their personality brings.)

The paella was extraordinarily good as was the company. I stayed for about two hours reading tarot, “adding value”. My donativo before the actual donation. Coincidentally it had stopped raining hard by the time I left. I had somewhere lovely to get to, and it was still a few hours walk to get there:

Someone put some money in my account this morning, and I know they did it because they’re reading my blog, know  how stubborn I am, and don’t want me to give myself hypothermia. So I booked a warm cheap apartment for 4 in Sarria and invited the pilgrims closest to me for a “pretend to be home and cook some vegetables” night.

Now I’m sitting in my sarong chilling out in the kitchen after a hot bath. People are cooking with quinoa and a wide variety of green things, and absolutely no dead pig. I’m not the only person wearing a sarong right now. There are candles and I’ve been burning shitloads of incense and smudging everyone with palo santo. I’m in heaven. Tonight I’ll sleep in a double bed…